According to some legends on the northern Plains of Sathendo, there was once a young Hifalendorin human woman who was courted by three princes or warlords about a century ago (in “game time”). She rejected them all out of pride, and was initially shunned by her community. This Vappu Lahja then made some deal with unknown powers to gain “independence” — and possibly longevity and other abilities — but at the cost of her soul. She also supposedly renegotiated the terms of the agreement to be more favorable.

It is not known whether the Vappu Lahja gathering Fey such as Centaurs hostile to humans, Halflings, and other farmers at the edges of the Wisalef Forest is the same person. 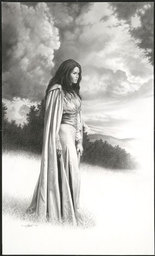