Backstory (include homeland/nationality, family/training, allegiances): Seeks arcane knowledge, interested in planar travel and the “Animal Court” (similar to the Seelie Court). Afraid of Dragons….wants to protect his people from those who would invade and harm the Zedu Kingdom…

Born the second child and firstborn son of a powerful Shan Sao Shukenga, Toshi had much to look forward to as the eventual heir to his father’s position in the Shan Sao Kingdom (9th Rank).

Unfortunately, Toshi was cursed from birth forward with “evil signs” or “omens of bad Luck” attending to him. His birth was on April, 4th at 4:44 p.m. [4 is unlucky in China] on a day with so much fog in the mountain valley that he was born in that the midwife coming to attend his mother never arrived. [Fog is Unlucky]. She fell off a mountain path and broke her leg.

By the time she arrived, Toshi’s mother was having issues and died 4 days after childbirth in a Bakemono ambush while she was being carried to Shinden Asahina — the primary temple and main medical facility of the Shan Sao. Toshi’s father blames him for his mother’s death and a series of financial reverses that began within months of his birth.

If this was not bad enough, strange things began to happen around the child. Strange animals would come into the house, wind spirits played with the roof and flags of his family castle “Shiro Yugue” if they were not whipping items up in Toshi’s room in Shiro Yugue (Twilight Castle — half above ground and half below ground and held by the Shan Sao in the middle of the Therud Forest, the area is also home to “Shinden Asahina” — Temple of the Morning Sun, 50 miles North of Akilu in the Therud Forest on the banks of the Hei Kang.) Even Oni attacked the castle once asking for a chance to kill the small child because they feared an ‘Evil Prophecy’ about him.

Attempting to ‘rid’ himself of the boy, Hiro Sembutsu made a very large contribution to the monks of Shinden Asahina and the monks took the 4-yr. old into their Temple for training. Toshi never showed any ability for the path of the Shukenja or the Sohei, but he did like martial arts and loved to assist the alchemists living in the Temple.

After an unfortunate event in the alchemy lab in which wind spirits caused a fire killing three peasant workers and a new Monk, the temple leaders were on the verge of throwing Toshi out of the monastery when Kida Kaiu arrived in search of some ancient scrolls of wisdom in the Temple Library. Seeing the commotion after the fire, the human Wu Jen (who served the Tong Sheng emperor for 15 years as Court Wizard) became intrigued.

In meeting Toshi and after reading the prophecy about him, he was quick to ask the monks if he could have him as an apprentice. The monks and Hiro Sembutsu both thought this a good outcome and looked to have Toshi’s bad luck far away, with the boy being someone else’s problem.

At this point, 8-year-old Toshi became the youngest apprentice to Kida Kaiu and ranking wizard formerly of the Emperor’s Court in Tong Shen. Kida did his work from the Jade Spire overlooking the Shiroi Kin Kawa (White Gold River) in the heights of the Bamor Mountains. It was here that Toshi finally found comfort.

Kida Kaiu determined that Toshi had been blessed by the Wind Spirits as one of their own, one who would become a Master of Air. As for the Oni — Toshi was apparently the “small tiger who would kill many Oni,” and they wanted to kill him before the prophecy could come to pass.

Toshi then began his 16-year apprenticeship. In Kida’s service, Toshi has come to be an outstanding student of the ancient scrolls and protector and keeper of the local sacred grove. In this grove, he met and now meets regularly with the Bisan (tree spirit — Dryad) Suki Amarina “Lady of the Teak Grove.”

Though over 70 years old (young for a teak tree) Suki is very fond of (and may be in love with) the Shan Sao. For his part, Toshi is in love. To prove his love, he will not use iron weapons — dangerous to ‘fey’ folk like Suki — preferring wood, stone, bronze or silver.

Likewise, he will not burn living plants for fear of destroying the spirits that reside in these plants. He wears a wooden bead necklace made from some of Suki’s branches that fell after a storm and writes his spells on scrolls made from her leaves.

Red Cloud Kung Fu: This is a real world Kung-Fu form that developed in the hill country of northwestern China. Its origins are said to be with a young peasant “Hong Yun” (whose name means “Red Cloud”).

Though he became a Grand Master, it was his first night that impressed the monks, who taught him the beginnings of this form. It is said that the monks would only teach him if he was found worthy. So it is said he knelt in the snow for a whole night with nothing to protect him from the cold. In the morning, the monks found him alive and well and ready for training.

This style relies on quick Strikes to Vital Areas along with Leg Sweeps to keep foes unbalanced. It also uses foot stomping and other sounds to distract opponents. The weapons training with this style is limited to daggers, Shruiken and Jo Sticks (quick Strike Weapons).

It was accepted by the Shan Sao as a form of martial art useful against both each other and larger humanoids (Humans, Korobokuru, and Oni). The Shan Sao say that Hong Yun was actually a Shan Sao of the Tiger Clan. The fierceness of the style, the way the weapons training is taught, the weapons used and its noble power are evocative of the Spirit of the Tiger and it is said that Shan Sao Grand Masters have perfected a derivative of Red Cloud Kung Fu that is called “Cloud Tiger Style.” 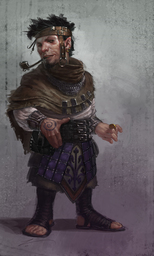