Aspects (can use a Fate point to tag for a +1d6 or a reroll on a 1d20 for skills, plus compels; start with five, gain one aspect or +1 to one attribute every 10 sessions or 2 levels):

Refresh: 4 remaining of 10 total (out of initial total of 6 Fate points, can be used to tag an aspect, make a declaration, or activate a stunt; plus 1 every 10 sessions or 2 levels)

Bio/backstory (include homeland/nationality, family/training, allegiances): Tempestade was born Miguel, a slave to the Candyland plantation, one of the largest plantations in the Mina Gerais state in Brazil. In his youth he was told that it would take more than a day to cross the land owned by Lord Yves d’Agneau, the Mestre of the estate.

Candyland was organized into different villages, each working different fields. Miguel lived in Rio de Cidade, a “port” town where sugarcane, coffee, and other crops were taken for transport downriver. The river proved to be his means of escape.

One day, Miguel noticed several men hiding in a cart of sugarcane, the bosses were passed out drunk in the noon sun so they didn’t. Miguel seized his opportunity and stowed away with them. They were not happy having such an inexperienced boy along with them, however kicking him out would attract more attention than letting him stay.

While there, Miguel was taught to hide, when to fight, and when not to fight. One fateful night while practicing in a storm, Armadeiras came out and watched Miguel training. He was impressed enough to baptize Miguel as Tempestade. Tempestade joined the men for a bit raiding until the bosses became sick of it.

One day, they came with metal monsters bellowing smoke and fire, gun that shot lightning and airships that dropped fire. Armadeiras told them to run and meet up later. Every man would look for a new place to set up the Mocambos.

Tempestade ran and found something strange, a small redheaded man, he offered to send Tempestade to a place where he could find a new home for his people. All he asked in return was when he came back to do as much damage as possible to his former bosses. Tempestade agreed and just as he was sent he noticed the man’s backwards feet.

Soon after the man sent him to this new land, he found Vistel’s Circus and began traveling with them…. 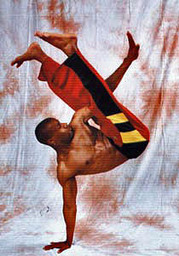