**Ring of Regeneration – 1 round

The tradition was broken for the first time in a long time with the birth of Hirokazu Kasugi — Saigo’s father — who turned out to be better suited as a general in the military than a special agent. Hirokazu’s inability to be a special agent extended Shinso’s time as a special agent, and he served the emperor into older age.

Saigo was trained from a young boy by his grandfather — perhaps the greatest special agent for the crown that ever came from house Kasugi. Saigo was also trained by the same teachers that taught the emperors two children. The emperor’s oldest daughter, one year older than Saigo (Nayoko), and his next oldest son (Mutsuhito) is same age as Saigo.

Saigo had very different relationships with both of them. With Nayoko, Saigo was best friends. both Nayoko and Saigo fell in love with each other at very young ages, but they never acted on their feelings — except almost a year ago to this day, when Nayoko kissed Saigo once.

Mutsuhito hated Saigo — everything Saigo was better than him at was thought an insult by the arrogant and self-doubting Mutsuhito. Saigo dislikes Mutsuhito and distrusts him. Though he tries to placate him as best as he can, he knows he has to tread lightly around Mutsuhito because he is a prince.

Even though they are not sure Saigo is ready to become a Special Agent for the emperor, with the disappearance of Shinso and one or two other agents – Saigo is pressed into service….

Wants more than anything to be able to marry Princess. Believes slaying the dragon will get him shot at that.

Bushido (code of honor): Some of the basic beliefs of this ethic are: 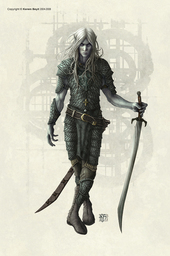