Refresh: 3? Fate points left (after stunts)
With Fate points, you can do the following:

Weapons (to update to FATE): Hand-to-Hand

Other equipment (and weight, locations):

Notes on “Dalis,” the sentient Heart Bow borne by Faelonia (as updated from AD&D2 to Pathfinder; to convert to FATE 3e Legends of Anglerre)
Some sources:

General Abilities: When using a Heart Bow, the bearer:

Faelonia and company went on many great quests, including: Walk from Evesboro; Labyrinths of Memir 2; city of Alfendi in the Waletku Forest; Nadwi Thieves’ Guild; Elven and Dwarven artifact hunts; Silgath, the Ivory Mountains, and the North; Ravenloft; Into the Underdark; Dragonflight 1 and 2; the Eastern Front; and “Chaos Wars” battles. She fought evil Sorcerers and warlords, including Dark Elven matrons Balesta and Katessa.

In the course of her travels, Faelonia earned the respect of many Dwarves and Elves, eventually becoming an ambassador. She joined the Talcontar family of Grey Elf Ranger “General Aldarion” [Gene D.] and Nannuattan Fighter “Thalissa” [John Z.G.], and revived the Mountain Ranger Guild. Faelonia was briefly entrusted with a Greater Orb by Elf Ranger “Kelan Elgoral” [David I.S.] in 1244. She also became a leader in the small community of Dark Elf defectors. Faelonia fell in love with and eventually married Grey Elf Rogue Shea [Peter G.L.J.D.], a Grey Elf Acrobat and another Heart Bow wielder. Faelonia withdrew from worldly affairs into her stronghold in Pugil because of her pregnancy in 1240.

While the Thallasaquendi of the Kelp Kingdom agreed to a naval alliance with Hifalendor against the Undead pirates, they rejected Waletku and Zuromm’s petitions. Faelonia and Shea later met with “Ibrahim al-Sufaia” [Byron V.O.], a Suthern [proto-Arabic] human Paladin of Ishmas, matron of magic [Egyptian: Isis], who accompanied them back to Hesolin and then to Alfhileno for training and research.

From there, she flew on borrowed royal griffons to the remote outpost of Silgath, where she regrouped with Tunnel, Rellim, and Shea, as well as with haughty Avariel (winged Elf) Fighter “Semaia D’Issichar” [Karen M.L.] and Ibrahim, before heading to “the Paragon’s” stronghold of Morbaltek and continuing the search for the missing metallic dragon allies of the Waletku Kingdom…

After helping Tunnel and members of “the Liberators” and “Dragonslayers” destroy the dreaded Flying Citadel of the Nannuattan, Faelonia prepared to return the Bracers of Air Control to the lost city of Tel Silat in the Halmed Desert and to accompany Ibrahim to the distant empire of Khemet [New Kingdom Egypt].

Former members of the “Dragonslayers” also explored Eagle’s Rest, founde the Gargoyle Headlands and a monastery/dojo, and slayed the Undead gold dragon Daneira in the port of Gisar.

Other Player Characters at SUNY-Binghamton

Some of the “Paragon,” “Liberators,” and “Dragonslayers” 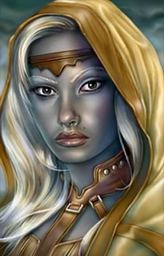