The war started shortly after the Drow seized control of the kingdom of Zuromm from the Orcs. They and the Duergar beseiged towns in the southern part of the Zeda kingdom of the Dwarves, which soon sued for truce. After obtaining a pledge of neutrality from the Dwarves, they attacked the Waletku kingdom’s western frontier. The sympathies of many Grey Elves to the Dwarves and Drow hampered defense of that region.

Meanwhile, the Drow made a secret pact with their Nannuattan cousins, who led the Kingdom of Gokuri to attack the Elven kingdom from the east. The Waletku Kingdom found itself fighting on two fronts.

The forces of Zuromm drove back the Elven knights and took Alfendi, with the aid of spies in the city. Gokuri made temporary alliances with some Barbari and humanoid tribes in the Gusorin Confederation, which now attacked the human Kingdom of Hifalendor.

On the Western Front, the use of summoned Demons by the Drow, as well as a few bold infiltration missions by Elven agents, led to an Orcish uprising. While Zuromm occupied much Zeda and Waletku territory, the hit-and-run tactics of the Dwarven Mountain Rangers, Elven Rangers, and Halfling Meadow Rangers (and Rogues) began to succeed in restoring morale.

On the Eastern Front, the Gusorin Confederation was defeated and turned on Gokuri forces at the Battle of Lake Bedoni. While Gokuri maintained air superiority over a large area, it didn’t hold as much land as its western allies, preferring torture to enslavement of its prisoners.

The full entry of the Kingdom of Hifalendor into the war further bolstered the Elven recovery. With some Saganim troops, the Hifalendorins successfully drove back enemy forces on both fronts. Finally dropping their neutrality, the Dwarves of Zeda managed a counterstrike against Zuromm through the Underdark.

Since the war, relations among the former combatants remain tentative. Within the Waletku Kingdom, the rise of the Rangers’ Guild and ascension of Ereval (a Ranger himself) to the throne has disrupted the centuries-long dominance of Wizards and knights in the Elven aristocracy. While the Wisalef Forest recovered relatively swiftly from the war, the Elven people are still healing (varying much by subrace).

Aldarion was made military governor of Alfendi for a time while the western part of the Waletku Kingdom was resecured, even though Prince Thasifel Reghlevon was the ranking noble in the region, because the prince had been allowed to stay in the city during the Drow occupation and had to reassert his loyalty to the king.

Other allies and followers:

Stronghold: Village of Olendi, in the Waletku kingdom of the Elves, Wisalef Forest, in the “Vanished Lands” (reached via Transfer Portals) 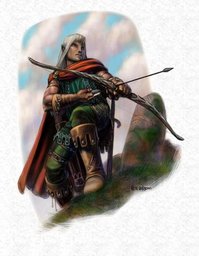