“1 to 7 May 1227 B.C.E.:” After a week’s refitting, the Zephyr was airworthy and left Hesolin, capital of the human kingdom of Hifalendor, but Princess Priscilla and Lady Matilda stowed aboard.

The airship’s shakedown cruise northward went relatively smoothly, and Elsa befriended a Treant. In the city of Nadwi, the crew reassured the ruling council that it meant no harm to the princess and offered to help deal with a Centaur uprising.

Freed from his cursed tattoo of the “Mad Mage” Ezra, Giacomo goes to the local Magisterium (magic school) and the Library of Memir to research Vappu Lahja, the mysterious woman named in an old fairy tale who is now stirring up conflict between the Centaurs and humans [see notes for the “Uncommon Companions”].

Scully stretches her legs outside Nadwi’s walls, but she keeps an jealous eye on Svetlana Taildunker, a Wolfen sailor who has recently come under her boyfriend “Capt. Niac’s” [Mike F./Non-Player Character] command.

Corwin visits the temple of Brijitt, goddess of fire and poetry, and talks with priestesses Anastasia and Claudia of the Harp. They relay messages from “Melchior” [Byron V.O.], who is watching Corwin’s enemies in the barbaric port of Gisar. The Bard also learns some Centaur songs.

Elsa still hopes to negotiate between the Centaur raiders and the Hifalendorin peasants, so she brews beer and bakes bread as gifts. Rhys spends all his money on provisions for the airship and takes fellow Gnome Mathilda sightseeing.

After learning at the Grove of Mekkil (Gaia) that some fey are nearby, Druid Elsa and Ranger Scully take their fellowship to meet them. They find a traders’ camp outside the city gates, including some Skaevingol (Viking-style) and Tsucharim (Mongol-style) humans, Wolven, and a few Centaurs.

“Rakhnar Longtail” [Rob A.S./N.P.C.] tells them that much of his tribe has left to follow “the white lady.” The shaman believes that Vappu Lahja is using a combination of ensorclement and clever political arguments to sway so many of his people, as well as Satyrs/Fauns and some Grugach (Wild Elves).

The Centaur asks the commanders of the Zephyr to look for and rescue Antiochus, a kinsman of his. In return, he warns about Theocles, a warlord following Vappu Lahja who could be a dangerous and cunning foe.

The next day, “Vistel’s Expedition” rides northeast, along the Aspar River. The wide Plains of Sathendo stretch to the south and east, and the caravan sees scattered hills to the north. Beyond them are the dense Wisalef Forest and the tall Ivory Mountains. To the west is the nefarious kingdom of Zuromm.

Wizard Giacomo brings Gerald, his homunculus familiar, leaving adept and girlfriend “Dread” Maggie Oakleaf back with the rest of the Zephyr ’s crew in Nadwi.

Corwin argues with Elsa about whether to allow Princess Priscilla to join the expedition, but he is outvoted. Scully wants to bring Svetlana to keep her away from Niac, but she reluctantly agrees to have her watch the princess.

Rhys notes that Mathilda isn’t as much of a potential liability and stuffs his three automatons and clockwork butler Vasco into his Bag of Holding. The Tinker Gnome also builds a platform for himself on the saddle of his pony.

Elsa casts Locate Object to find the ring of Baskor Steadyhand, a roustabout in Vistel’s Circus, which has been captured by Vappu Lahja’s followers. It leads the Hill Dwarf toward the hamlet of Alarn, about four days’ ride away.

Flind Scully hunts with her owl “Owlicious” to supplement the team’s rations with small game. Hifalendorin human and city slicker Giacomo recommends that the Ranger or Druid cast Speak With Animals to see if the circus has passed recently.

Half-Elf Corwin sings as a thunderstorm passes over the plains, and Tinker Gnome Rhys is careful to keep his contraptions dry. Scully spots tracks of three quadrupeds with cloven hooves. She scouts ahead and sees three unicorns with Elven riders, but the group decides against a detour to meet them.

Sometime later, the scouts see something more worrisome: tents not in the Hifalendorin or Saganim style. Giacomo, Corwin, and Rhys stay back with the horses, while Scully Wild Shapes into a sparrow, and Elsa transforms into an auroch (ancient bovine).

They observe humans wearing patchwork armor and a ragged black pennant with angular red and silver symbols — the flag of Zuromm. Scully shifts into rat form to get a closer look, while Elsa realizes that she might be mistaken for livestock or prey and heads back to the party.

Scully crawls into one tent, which is more crowded and orderly than its exterior might suggest. She sees components for shamanic rituals and a muscular, green-skinned humanoid in black armor. The Ranger dodges hobnailed boots and runs out of the Orc encampment.

Giacomo recommends pressing on toward Alarn through the night, avoiding the Zuromm troops. Scully points out that a proper detour will take hours. Corwin wants to fight, but Elsa wants to stay on mission. Rhys notices that the enemy forces are headed toward the town of Kedetura, which is where Vappu Lahja is believed to be.

Stealthy Scully takes the lead as the group rides on. Rhys follows, protected by a Silence spell from Giacomo. The wary mage also casts Invisibility on winged Gerald. Corwin sulks in his saddle, while Elsa and her banuq (winged cat) Penryn take rearguard. She also casts Message to warn Prince Andre de Giles in Nadwi about the Orcs.

The tired travelers eventually reach Alarn, which they find mostly abandoned. Farmers huddle in their houses, and the lone thoroughfare is empty. The adventuring party passes a boarded-up chapel and stops at the “Mellow Mule” tavern.

They meet a toothless old man playing a battered harmonium and a young girl with lank hair and a tattered dress. The visitors quickly realize that they are ghosts and hastily leave. Elsa again casts Locate Object, which indicates that members of Vistel’s Circus are in a vine-shrouded barn.

The dark leaves shudder as if from an imperceptible breeze, and roots break out of the dry soil toward the group. Giacomo casts Detect Magic and Shield, and Scully draws her long bow and maneuvers. Elsa looks for cover and Wild Shapes into a vulture.

Corwin casts Displacement and Fly on himself, while Rhys readies his clockwork scorpion, which spits acid, and his dragon construct, which can produce fire. Elsa casts Control Plants and has the vines tear the barn doors off their hinges before parting.

The explorers enter the barn and see the wagons of their former traveling companions in the carnival. They hear a high-pitched voice welcoming them, and flying Elsa, Corwin, and Giacomo see small figures made out of twigs moving in the rafters.

Corwin casts Light and reveals a short, bearded man dressed all in red, from his floppy cap to his pointed boots. Despite some similarities, Rhys knows he is not a Gnome. The fellow introduces himself as Gilean and shows off a necklace of hands, one of which has Baskor’s ring!

Prince Corwin casts Lightning Bolt at the evil fey, and Elsa has the vines entangle the Twigjacks. Giacomo activates a Contingency spell on Gerald, and Rhys sends his devices to the carriages to search for survivors. Scully fires arrows.

Gilean shrugs off his electrical burns, and Elsa has the vines rip the roof off the barn. The Dwarf Druid then casts Lightning Strike. Wizard Giacomo casts Mage’s Sword while his familiar turns red as he takes on the Form of the Dragon.

The Redcap refuses to admit defeat. He stomps on the ground three times, causing it to tremble. Gilean then phases into the earth, escaping further spells and arrows. Giacomo sends enlarged Gerald to fly over Alarn to see if there’s any further sign of him. 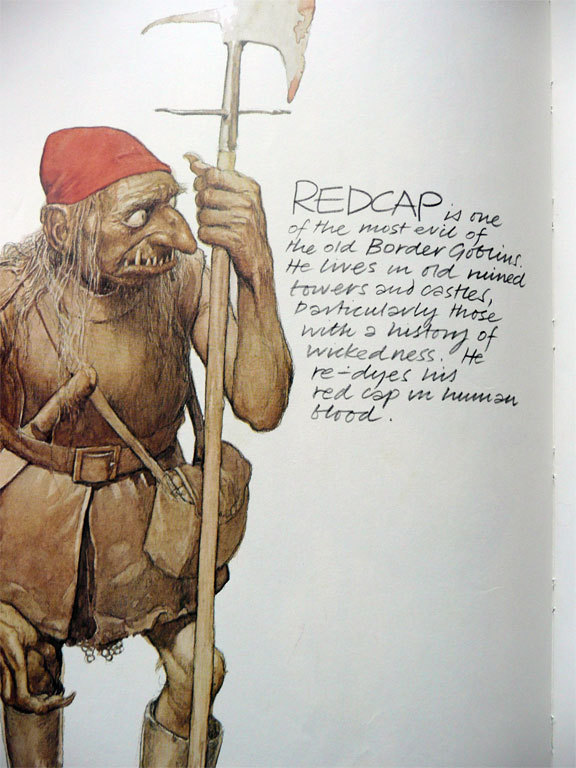 Elsa mourns her friends, who likely put up a fight, and Corwin vows vengeance and begins preparing spells to Raise the Dead. The onetime performers deduce from the looted carriages that the rest of the circus has probably been sent on to Kedetura.

The wanderers rest in Alarn for two days, resurrecting the carnival folk, but the spellcasters aren’t able to restore their severed hands. The five people are put on Phantom Steeds, which can run down the Aspar River toward Nadwi, away from hostile fey.

Elsa sends for the Zephyr to warn Prince Andre and evacuate the remaining farmers. With grim determination, the away team prepares to head to Kedetura to confront Vappu Lahja and her Unseelie Court followers….

We’ll be picking up next Monday, Dec. 8, right where we left off. That’ll probably be the last regular “Vanished Lands” face-to-face game of 2014! Be seeing you, -Gene