Shopping and plotting in Hesolin

In one ancient world, there was a region where strange majicks and demihuman races thrived. The “Vanished Lands” were blessed by the gods and cursed by prophecy. Travelers became adventurers, and adventurers strove to be heroes in the face of many perils and wonders. One such band began as circus performers, became defenders of the kingdom of Saganim, and voyaged aboard the Zephyr….

“12 to 14 April 1227 B.C.E.:” In the Saganim village of Sanry, “Vistel’s Expedition” worked with its new crew and met with Capt. Scarlet of the Sea Elven schooner Foamrunner. The Zephyr then went to Hesolin, capital of the (proto-Western European) human kingdom of Hifalendor.

Giacomo and Rhys visited a whirlygig shop and the temple of Otih, while Corwin and Elsa checked in at the Saganim embassy. Scully and her boyfriend, Wolfen Paladin “Capt. Niac” [Mike F./Non-Player Character], go ashore to practice their archery and recruit additional sailors.

Corwin plans to buy or trade weapons and armor at the Istari Bazaar, while Elsa acquires a Bag of Holding, Heward’s Handy Haversack, a ring of Protection (+ 2), a Rope of Climbing, a Wand of Silence, and magical studded leather armor (+2). She looks forward to reuniting with Vistel’s Circus.

Giacomo is escorted by Paladins of Otih and Urda to the local Magisterium (magic school), where he conducts research on ridding himself of his cursed tattoo of the “Mad Mage” Ezra. The holy warriors also prepare an exorcism ritual for the Hifalendorin Wizard, who plans to consult Zarendo (East African) human herbalist “Tondra” [Rob A.S./N.P.C.].

Each evening, the adventurers gather for dinner at their rented villa near the “Golden Horn” hotel and restaurant. They are pleasantly surprised when Melchior [guest Byron V.O.] briefly rejoins them. He uses Mage Hand to shutter the windows and extinguish most lamps.

The Saganim (proto-Celtic) human Cleric of Ulandt, goddess of the night, reports on his investigations in the barbaric port of Gisar. Corwin’s half-brother Prince Daven and Sean Sable (whose family is suspected of necromancy) have been recruiting mercenaries.

In addition, Lord Dalek, the Tiefling (demon-touched) Sorcerer who once framed Corwin for murder, may be working with the vampires who rule Gisar, says Melchior. Corwin wants to pursue Dalek, but Melchior points out that it will take him several weeks to set up a safehouse in the city, where former teammate Hamfast remains.

The former “Seeker of Lore” also warns that relying too heavily on Teleport is a bad idea as long as the Pit Fiend on Salhonif Island is looking for the group. The group had infiltrated a Temple of Elemental Evil and freed an Efreeti from her bondage to Schm*ckF*ck.

Melchior detects that someone has scryed upon Prince Corwin and Rhys, who has worked most closely on the time-displaced steamboat. Elsa adds anti-scrying measures to her list of potential enchantments for the Zephyr, such as protections against fire, rust and noise.

The next day, Scully and Elsa lead the way to the Grove of Mekkil outside Hesolin’s walls. They find a dimunitive Forest Gnome Druid singing to a sleepy badger. Gaffy Barkeater tells the Ranger and Druid about where to find exotic animals such as pegasi and griffons.

Elsa asks about recent strife between centaurs and Hifalendorin humans on the northern Plains of Sathendo. Gaffy says that a centaur named Zenos may know more and that he can often be found at the “Quiet Deer” tavern.

In Hesolin’s theater district, Corwin and Melchior meet Yvonne Valetta, a priestess of Brijitt, goddess of fire and poetry. She recognizes the Half-Elf’s reference to Maeve Gallagher, a Cleric at the Bardic College in Thadenis, capital of the kingdom of Saganim. Corwin gives her a generous donation of 250 crowns (gold pieces).

Yvonne recounts the fairy tale of Vappu Lahja, a woman woed about a century ago by three lords. She was proud and rejected them and was forced to live out her days alone as the lords fought among themselves, bringing much death to the land [see “Uncommon Companions” notes].

Melchior and Rhys note the similarities between the mysterious woman said to be stirring up conflict between the centaurs and Hifalendorin peasants and “Capt. Jack Kildare” [Randy K.M./N.P.C.], the Saganim pirate who has somehow “hacked” his curse to become leader of the dreaded Ghost Fleet.

In addition, Yvonne mentions “Westly the Wondrous” [Alex J./N.P.C.], a Saganim Bard (and former “Dragonslayer”) in residence at the “Bright Battlement” tavern. Elsa plans to visit the Library of Memir to see if she can uncover more information.

Sometime later, “Vistel’s Expedition” and Melchior go to the palace for a royal audience, thanks to Saganim ambassador Sir Culwych. They admire its high towers, thick stone walls, and well-armored guards. Magical scans sweep over the visitors as they pass by iron-bound gates, parade grounds, and colorful gardens. 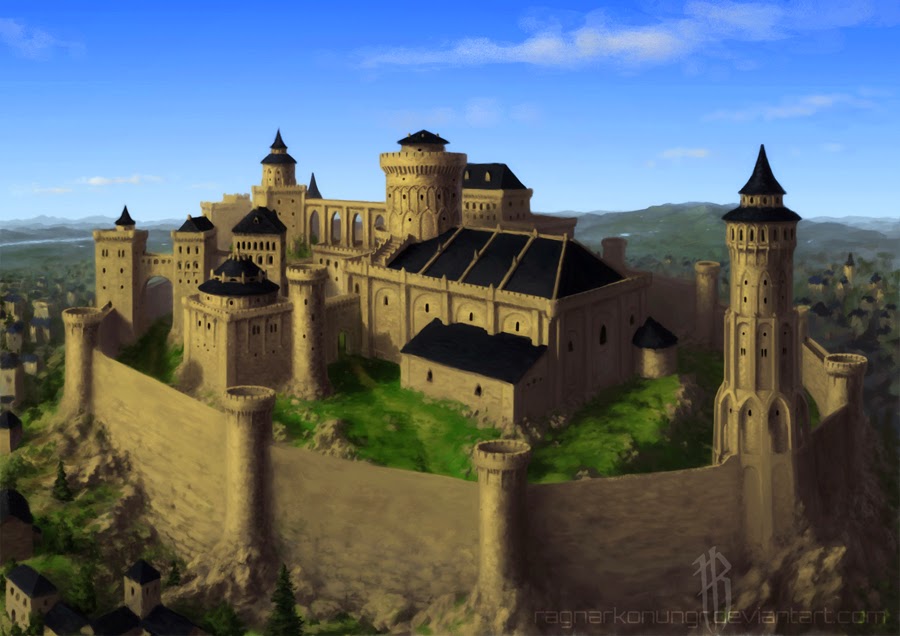 Elsa brings her banuq (winged cat) Penryn, and Rhys dismounts from Vasco, his clockwork butler. Despite being an agent of her majesty’s (Queen Margaret of Saganim) secret service, Melchior introduces himself without an alias.

Heralds announce the heroes as they enter a great hall with massive pillars with inscriptions in multiple languages, a vaulted ceiling, and a red and white checkerboard marble floor. They briefly wait in a receiving line before bowing before the throne. Counselors sit on curved benches nearby.

Prince Corwin introduces himself, and King Akkon XII sends greetings to his “brother king,” Edmund II of Saganim (and Corwin’s father). Hill Dwarf Elsa asks for support for her long-range communications network, and Queen Belinda offers a room in the palace.

However, Adm. Clothard Leontis is skeptical about proposals for widening the naval alliance between Hifalendor and Saganim against the Ghost Fleet to include the Ebir Sheikdom, the Kelp Kingdom, and the Principality of Silado (Tong Sheng).

Elsa and Corwin assure King Akkon that they have the approval of King Edmund and hope to visit more capitals. Adm. Leontis notes that existing allied forces are outnumbered by Undead pirates by about 10:1, but he grudgingly grants permission to inspect the naval base at the Gargoyle Headlands, about two days’ sail east of Hesolin.

Flind Scully and Gnome Rhys ask about the evil cult of Krakas, lord of the maelstrom, and additional defenses for the Zephyr. The admiral recommends checking with Hesolin’s harbormaster and the temple of Addoh, lord of the sea.

As a gesture of goodwill, the onetime circus performers offer to investigate the centaur attacks on northern farms. Lord Taneli Ellarthen, a Quelithan (High Elf) court mage, observes that Hifalendor would prefer to avoid bloodshed among its citizens and neighboring fey folk such as satyrs and centaurs.

King Akkon notes that his son, Prince Decius, was held hostage in the frontier until he was rescued by the King’s Cavaliers [see “Faith-Based Initiative” notes]. The petitioners notice an athletic young woman, later identified as Princess Priscilla, and Corwin and Melchior (who is married) can’t help but flirt with her.

Gen. Naresh du Goray says that troops in the city of Nadwi stand ready to help, but the adventuring party may be able to deal with threats that he cannot. The king approves of the party’s missions on behalf of Hifalendor.

The happy wanderers return to the “Golden Horn” and begin plotting a course to the Gargoyle Headlands, Nadwi, Falit, and more ports….

While we missed Beruk and Josh, it was good to see everyone, plus Thomas & Kai-Yin, for Byron’s latest visit to the Boston area! I hope that those of you with colds recover soon. Also, remember to update your character records on Obsidian Portal and let me know of any changes regarding equipment or spells.