“16 to 21 March 1227 B.C.E.:” After deciding to continue traveling on the Balef River, the group escorting a Gokuri diplomat stopped at the “Sandy Corner,” a tavern on stilts. They found mysterious skeletal warriors, an old curse, and giant amoebas.

Sonny and Saigo suspect Lady Yun Aei-Yong of being involved with the latest attack. The Nannuattan emissary tells the Kensai and Samurai that the monsters were likely attracted to the inn, but they could have been summoned by a ooze master.

Ember and Soske’ have tea and breakfast. The Druid talks about the wonders of flight, and the Shukenja blesses their meal. Merchant Moon Jung-Mo and Wu Jen Toshi help the boatmen reload the three barges.

Since the skeletons have been damaged, Sonny wonders if they should be rearmed, but Saigo doesn’t think it’s necessary. Soske’ suggests finding a way to resolve the fate on the Undead, who have been cursed to stand guard until their traitorous commander or his stolen gold return.

Saigo says that the team’s first duty is to covey Lady Yun safely to Sogewa, capital of Tong Sheng. The Mahotsukai (Sorceress), however, says she doesn’t mind a minor delay.

Ember notes that the skeletons have protected the “Sandy Corner,” but innkeeper Tan Shude says they indiscriminately attack anyone who is out at night. After some debate, the adventuring party decides to quickly check the nearby marshes.

Saigo asks Lady Yun to stay back with Toshi, Draconian bodyguard Oh Kum-Ja, and the boatmen. Hengeyokai Ember shifts into crane form to lead the way back to the rocky outcropping that she and Shan Sao Toshi had found.

Sonny, Saigo, and Soske’ cautiously proceed, with Jung-Mo quietly flanking in the snowy reeds. At the cave mouth, Ember, Saigo, and Soske’ hear snuffling and see a humanoid figure. Bamboo Spirit Folk Saigo throws a rock and hears a yell. It throws something at them.

From the air, Ember spots the leg of a local man who had been partially eaten by a giant amoeba. Stealthy Jung-Mo sneaks ahead, while Shengtese human Sonny looks in the cold water for other threats.

Shengtese priest Soske’ casts Protection From Evil, and he and Saigo draw their bows. Their arrows hit the emaciated humanoid. Ember casts Entangle, but her spell and Jung-Mo’s sneak attack both miss. 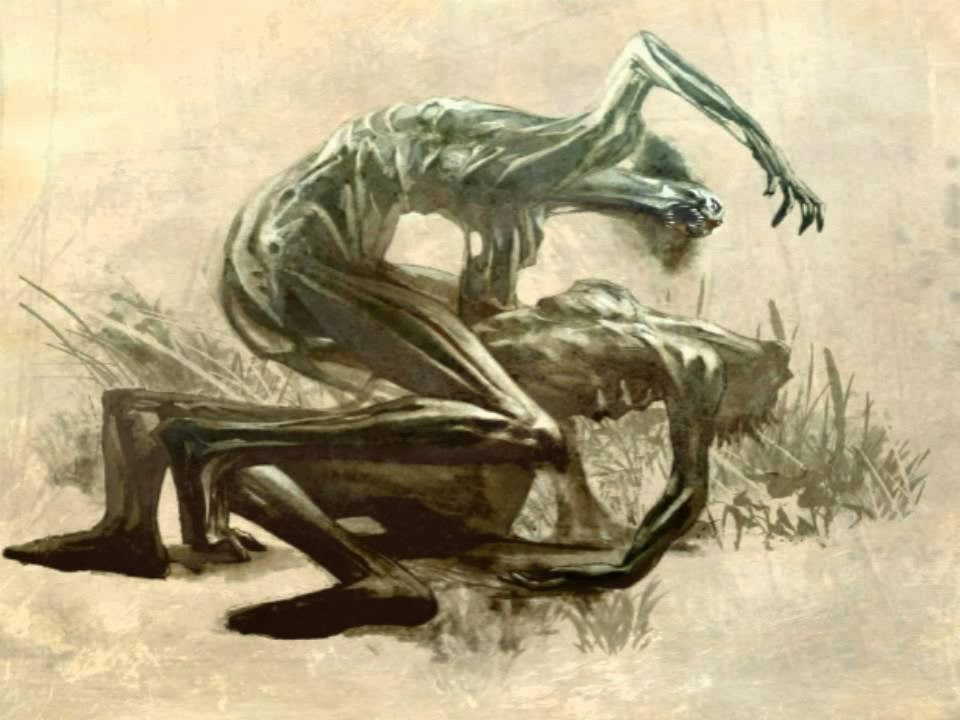 The ghoul, which Soske’ later identifies as a Jikininki, swings wildly at Jung-Mo. Sonny swings a weighted chain at the Undead. Soske’s second volley misses, and Saigo drops his daikyu and runs to close the distance.

Jung-Mo nearly hits Ember with a whippet (incendiary boomerang), and Soske’ casts Weapon Bless on Saigo’s katana, helping him to destroy the Jikininki in one blow.

Ember, who has shifted back to humanoid form, helps Saigo search the cave. They find rotten armor, a broken sword, a small chest, and a bundle of rags. Saigo takes the arms, while Ember finds gold coins in the rags.

Sonny searches the Jikininki and notices scraps of an antique Shengtese military uniform. Jung-Mo torches the corpse before helping Ember examine the chest. The Spirit Folk Yakuza eventually finds a needle trap and a chop (seal) of office.

Soske’ uses Sense Elements — Psychometry on the clothing and chest to identify the Undead officer as the traitor Ba Lang Liangde. Satisfied, the travelers return to the tavern. The skeletal sentries climb down from their rooftop perches.

Soske’ tells them that their honor is restored. The warriors take the katana and chest and march off into the swamp. Tan Shude thanks the would-be heroes for their help.

Ember and Sonny notice the seal of the Dragon Clan on the coins, which have been left behind. Sonny notes that the innkeeper has already been reimbursed for damages, and Soske’ says he’d like to return the gold to the Dragon Clan. Given Ember’s interest, the others let her hold onto the booty.

The three boats continue south on the Balef River for a few uneventful days. Jung-Mo analyzes the poison from the chest as a paralytic. The courtier also continues wooing Ember and avoiding Lady Yun. Toshi studies his arcane scrolls.

The boats stop one night at Dulthor, a hamlet on the Gokuri side of the river. Two Tsucharim (Mongol-style) human guards greet Lady Yun as she, Oh Kum-Ja, and others come ashore. Seng Yip Wu welcomes Lady Yun to the Nannuattan outpost.

Seng orders servants to carry the visitors’ gear as they descend three levels into the hills. The obsequious scribe shows them to a small but luxurious suite and leaves. Jung-Mo tries to slip out of the chambers but is blocked by Oh Kum-Jah and two guards out in the hallway.

Soske’ finds extra coins in his purse, which Lady Yun says could be used to magically track his movements. The Shukenja again uses Psychometry and gets a brief vision of an old man with two noses, no doubt an Oni, and a Nannuattan woman in armor.

Saigo sets watches and sits the first one with Ember. Soske’ and Moon take the second, with Sonny and Saigo planning to take the third to let Toshi study and rest. During the second watch, Soske’ and Jung-Mo hear a servant girl roll something into their room.

Quick-thinking Soske’ grabs the grenade and tosses it back, incapacitating the two guards. He then drags Oh Kum-Ja back into the cell and tries to rouse the Draconian. Saigo tells Lady Yun that they’re leaving and draws his katana.

Ember studies the grenade and helps revive burly Oh Kum-Jah. Soske’ uses smelling salts on one of the serving girls and interrogates her. She reveals that her mistress is Byong Sudae, a former rival of Lady Yun demoted to the border outpost.

The group grimly prepares to fight its way through the Dark Elven outpost back to the surface….

I hope that everyone’s holidays were happy, and Byron, I hope your daughter’s birthday celebrations went well. I look forward to continuing our adventures on Sunday, 5 January 2014.