“21 August 1227 B.C.E.:” The adventuring party arrived at Hei Kuan just in time for the Karitori Matsuri, or “Reaping Festival.” The group’s search for followers of a chaos dragon led to reptilian Zukojin and a three-eyed, four-armed creature outside the village.

Jung-Mo throws whippets (incendiary boomerangs) to start a fire to help screen the retreating peasants from the scaly folk. The civilians had been walking in an entranced procession toward a lit pagoda containing the large monster. Saigo shepherds the Spirit Folk and Shan Sao back to town.

Sonny, who had spotted a member of the rival Crane Clan, moves through the crowd after seeing Jung-Mo’s signal flare. Soske’ joins him. Toshi and Ember, who were following a Kitsune (fox woman), change into bird form and fly out to investigate.

Jung-Mo creeps through the nighttime darkness as the six Zukojin approach the path leading from Hei Kuan to the pagoda. Toshi and Ember land nearby and shift back to Halfling and Hengeyokai form, respectively, to cast spells. 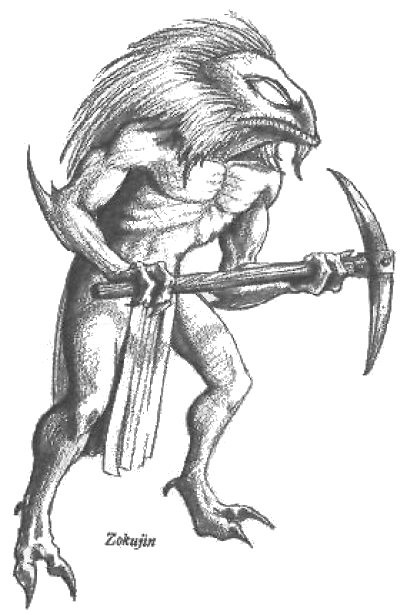 Sonny and Soske’ run to catch up, passing Samurai Saigo and those returning to the walled village. Ninja Jung-Mo fires arrows at two of the humanoids, and one succumbs to his knockout poison.

Druid Ember casts Obscurement, creating more mist to help the stragglers escape the Zukojin. Wu Jen Toshi looses a volley of shuriken-shaped Magic Missiles at the lizard-kin, who attack him and Ember.

Shukenja Soske’ shoots arrows, and Kensai Sonny continues to close in. Jung-Mo knocks out another Zukojin and runs after two retreating toward the pagoda. Ember Wild Shapes into a black panther and pounces on one of her foes. 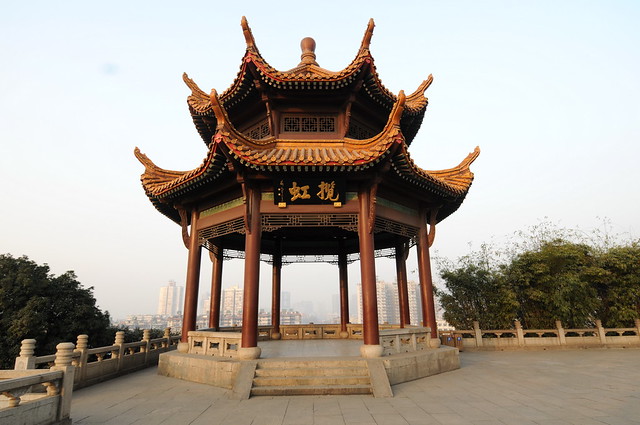 Toshi finishes off that opponent with more Magic Missiles, and he kills the three remaining Zukojin with Fiery Dragon. Jung-Mo reaches the shrine and gets a better look at the demon. He falls back to report to his companions.

Toshi recognizes the description of a Yau-Mor named Lung Jua, or “Claw of the Dragon,” no doubt a reference to the chaos dragon they’re hunting. The Shan Sao Wizard is eager to fulfill his destiny and slay a major Oni (Ogre Mage).

Soske’ suspects that the local authorities have been corrupted or misled into sending villagers as sacrifices to the pagoda under the pretense of a harvest festival.

Nannuattan Jung-Mo and Toshi (back in bird form as a black baza) stealthily maneuver to the rear of the pagoda. Ember casts Warp Wood on the roof, causing it to collapse. The Yao-Mor belches flame and casts Power Word: Blind, but the would-be heroes resist.

Toshi casts Cone of Cold and narrowly evades the demon’s Baleful Polymorph. The Yao-Mor swings its swords at Soske, who ducks beyond the monster after missing it. Sonny realizes that his whip isn’t enough to affect the massive beast, so he goes to get Saigo for backup.

Jung-Mo dodges burning debris, and Ember slows Lung Jua with Rock to Mud on the stone steps. Toshi’s Cold Ball helps, but the spell unfortunately catches Soske’ in its blast. The Yao-Mor can’t reach Soske’, but it does hit Toshi.

Soske’ backs up and casts Divine Power on himself, and Ember hits with Call Lightning. Toshi joins in with another Cone of Cold, as the team presses its fight with the demon….

Bruce, we missed “Saigo” this past week! I look forward to our last “New Dawn” sessions, as well as to more of the new D&D5e “Vanished Lands” face-to-face team and Jason E.R.’s “Star Wars: Dark Times” game. In the meantime, have a happy Independence Day, -Gene