“16 to 20 August 1227 B.C.E.:” The travelers hiked deeper into the Bamor Mountains while hunting a dangerous dragon. On the way, they passed poor Korobokuru (eastern Dwarven) hamlets, met honorable mercenaries, and fought aquatic daemons.

The former diplomatic escorts discuss their mission for Hou Keung, the Korobokuru daimyo and ruler of the Zedu kingdom. Jung-Mo recalls Nannuattan tales of rare shadow dragons lurking in the Underdark.

As they approach the village of Hei Kuan at the northern edge of the Therud Forest, Sonny wonders how to engage minions of the chaotic drake. Toshi recommends using previous cover identities and asking if anyone knows Zhu Xiaoping, an infernal inquisitor they defeated near the Chieng Hsien Stream on the eastern Plains of Sathendo.

Saigo recommends using previous cover identities, and Ember agrees to pose as bait if needed to draw out the dragon’s spies. Soske’ isn’t worried about finding enemies, only about how and when to fight them. 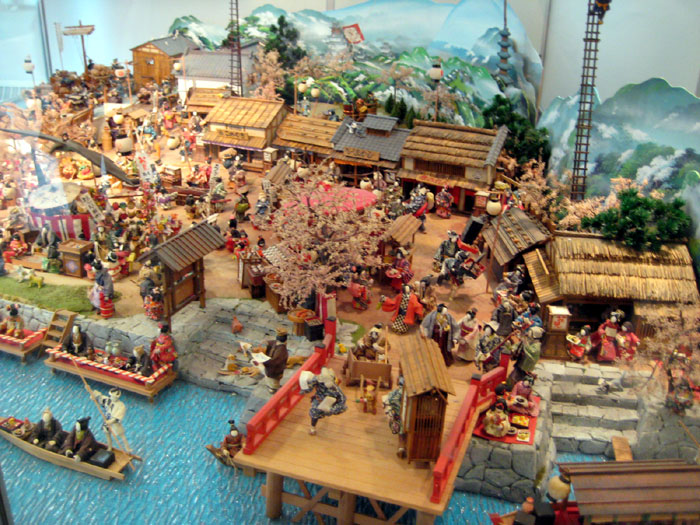 The trio meets Kaji Kiyoshi, a Korobokuru blacksmith who mentions the Karitori Matsuri, or “Reaping Festival.” He agrees to trade weapons with “Xiaoming.”

As herbalist “Tiye Akamoto,” Toshi finds the “House of the Glowing Carp.” Saigo accompanies him as Ronin “Shiraso Takadashi,” while Soske’ poses as soothsayer “Shishi” and guards the team’s animals.

At the tea house, “Tiye” and “Shiraso” talk with attractive geisha Miyamoto Narumi. She mentions Shiomi Romi, a priestess of the Path of Order who knows some alchemy.

The infiltrators later regroup at the Mastical Inn at the edge of town. They pay 40 tael (20 gold pieces) for one night because of demand around Karitori Matsuri.

Nannuattan Jung-Mo identifies some coins for Shan Sao Toshi as coming from the Empire of Gokuri. Shengtese human Sonny chats with his steed Yip on what they have observed so far.

Hengeyokai Ember checks with Shengtese Soske’ on the state of the horses, tiger, and wyvern. Bamboo Spirit Folk Saigo plans to spend 3,000 tael (1,500 g.p.) on potions of Resist Acid and Fire.

Toshi and Ember volunteer to scout from overhead in bird form. The Wu Jen and Druid tell the others to rendezvous at the House of the Glowing Carp.

Jung-Mo and Saigo resume their disguises and stealthily approach the center of town as night falls. The Ninja and Samurai both have Invisibility as a backup. Kensai Sonny, however, walks directly to the reaping festivities.

Kenmotsu Masashi, Hei Kuan’s mayor, gives a brief speech. The Bamboo Spirit Folk (eastern Sylvan Elf) is joined on a dais by a man with a panther head. Jung-Mo asks a bystander what happens after the surprisingly raucous celebration and learns of a procession out into the woods.

In the crowd, Sonny recognizes Seng Ying Hu from the Daidoji House of the Crane Clan. The Shengtese (East Asian) human was involved with the disgrace of Sonny’s house in the Lion Clan. The Monk talks with other courtiers.

Toshi watches as fellow Shan Sao (eastern Halflings), including a Sohei with a large mace, carousing. Ember notices a strange-looking woman, so she and Toshi follow her. They eventually spot the tails of a Kitsune, a mischievous fox woman. Endo Mayumi makes sure that the townsfolk stay drunk, leading Toshi to conclude that she may be an agent of the chaos dragon.

Jung-Mo, Sonny, and Saigo follow the throng that parades out of the village, while Toshi, Saigo, and Soske’ watch those who remain. The Shan Sao, Spirit Folk, and human peasants carry torches and lanterns as they stagger along a northward trail.

Saigo spots reptilian humanoids shadowing the crowd in the fields on either side. Jung-Mo peers through the darkness at a pagoda ahead and sees a 12-foot-tall creature with three eyes, greenish scales, a bull’s horns, and four arms.

Swift Jung-Mo throws a flash pellet to briefly illuminate the Zokujin, and Saigo boldly draws his weapons and shouts for people to return to the village.

Still in bird form, Toshi spots Jung-Mo’s flare, and he signals fellow shapeshifter Ember that they have to leave the village to help their friends…

After several months, it was good to get back to this adventuring party! I look forward to wrapping up this scenario in the next session or two, and I hope that we’ll be able to start on time next time.

Thanks again, Bruce, for hosting a fun cookout! Remember that we won’t be meeting virtually next weekend because of Father’s Day. We’ll try a Google+ hangout on Sunday, June 28.

In the meantime, remember to review your characters for this and the D&D5e groups. I look forward to seeing some of you at upcoming nautical and “Star Wars: Dark Times” games, -Gene