“8 to 31 July 1227 B.C.E.:” In Bazran Hai, capital of the Zedu kingdom, the onetime diplomatic escorts encountered Kobold and Nannuattan spies. Jung-Mo recognized a fellow Ninja as his former lover, and Soske’ communed with ancestor spirits and the god of judgment to learn the whereabouts of Saigo Kasugi’s grandfather.

A Limited Wish summoned Gen. Shinso Saigo from captivity beneath Bazran Hai’s citadel, but his memories were limited. The group followed a suspicious landscaper into the sewers, where it captured him after defeating two Yuan-ti Abominations.

Shengtese human Sonny asks Jung-Mo if he has encountered the serpent folk before, and Jung Mo answers in the negative before revealing his true form as a Nannuattan to interrogate the prisoner.

Soske’ recalls that the Yuan-ti worship chthonic deities, and the Shengtese human wonders if there is a connection to the chaos spreading across the countryside. Bamboo Spirit Folk Saigo joins Jung-Mo in questioning the faux Shijo Joshifumi.

Tokoro keeps watch on the roof for more enemies. Via Toshi’s Message spell, the carp Hengeyokai observes that while the group recently encountered, captured, and released a Kobold and a Nannuattan Ninja, it probably won’t be so merciful to the Yuan-ti.

Jung-Mo politely asks Shijo about his mission, and the Yuan-ti says that it is likely the same as the eastern Dark Elves’ — watching and undermining the leaders of the Zedu kingdom and Tong Sheng. He is not afraid of torture but is surprisingly forthcoming. Sonny recommends more specific questions.

Saigo wants to know why his family’s home was being watched. Shijo admits that he was watching several influential households in his guise as a master gardener. Soske’ recognizes Shijo’s mention of evil deity Mi-Shao-Shur.

Toshi casts Mind Read and verifies that the Yuan-ti are connected to a dragon seen by Gen. Shinso before he was captured, as well as to the Red Wastes to the northeast. The adventuring party also learns of a backup plan involving a Yuan-ti Pureblood disguised as a Korobokuru (eastern Dwarf).

Shijo explains that his cell planned to infiltrate the citadel with knowledge from Gen. Shinso and was close to completing his likeness. Toshi sees images in the shapeshifter’s mind of a plot to get close to and replace the daimyo and shogun.

Jung-Mo learns that the scaly folk have infiltrated several cities and that they report to the dragon. Saigo asks whether the Korobokuru silversmith who met with Oh Ok-Sun, Jung-Mo’s former lover, is also working for the Yuan-ti.

Toshi asks about Lady Shiori Heikkaki, whose name was on a scroll of Summoning confiscated from the Kobolds. Shijo says that the diminutive reptilian canines have been useful in keeping track of Gokuri’s agents in Bazran Hai.

On the roof, Tokoro notices some troop movements but nobody from the nefarious Gokuri Empire or the Scarlet Order. Jung-Mo finishes the questioning by knocking Shijo out with a poisoned dart before he can cast any rituals.

Sonny suggests checking out the Yoshifumi house, and Ember, Soske’, and Tokoro agree to go. Toshi writes a note to Lady Fu Hao, the favored concubine of the distant Shang emperor. Saigo sends a messenger to seek an audience with his superiors.

At the Yoshifumi house, Ember Wild Shapes into a ferret, briefly attracting the attention of Tokoro’s otter Mala. The Wu creates a diversion by running past guard dogs and leading them through the living quarters.

Soske’ casts True Seeing to watch the comings and goings. The Shukenja spots a few disguised Yuan-ti among the groundskeepers. Tokoro sneaks into the workshop and finds tools with hidden weapons. Thanks to Ember distracting the dogs, the Hulinyuan manages to hide the questionable tools and slip out undetected.

Back at the Dragon’s Beard, Jung-Mo makes sure that Shijo has no suicide poison. Jung-Mo also watches the hotel, his young wyvern, and Toshi’s tiger Amaya while the others regroup and head to the palace.

Sonny tells Jung-Mo that he trusts him, even if the Kensai doesn’t always understand the Ninja. Wu-Jen Toshi casts Arcane Mark to help track the Yuan-ti if necessary.

Ember is torn between staying with Jung-Mo and going to the royal court, but her curiosity about other dragons is piqued. Saigo is relieved when guards arrive to escort the prisoner and Gen. Shinso in a covered carriage. Saigo arms his grandfather with the katana of Wounding confiscated from duplicitous Gen. Wang Tung back in Sogewa.

As they enter the citadel, the wanderers recognize previous acquaintances. Ember avoids Murakami “Murray” Ryozo, a court adept, but Soske’ isn’t so lucky. His Uncle Manny finds him and wants to hear all about his travels. 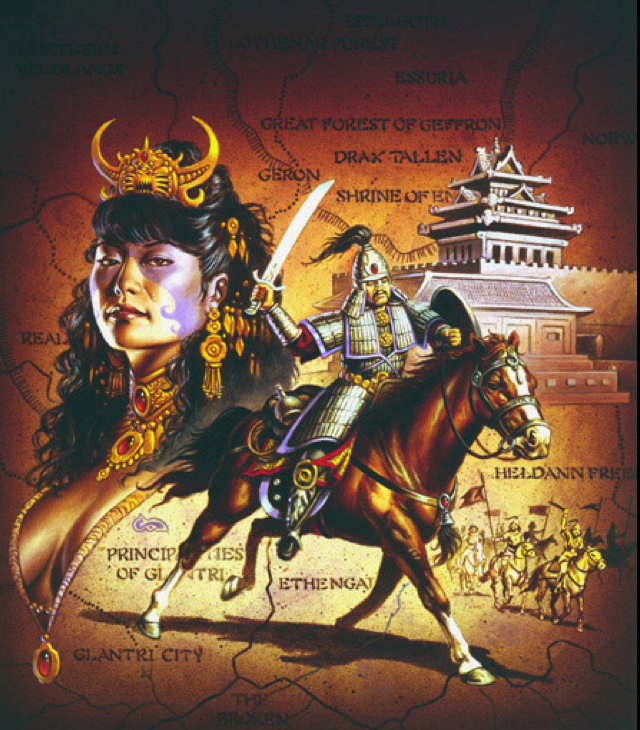 The young priest manages to get his kinsman to wait outside while he joins his companions. They bow before Ryoushi Manabu, the Bamboo Spirit Folk shogun (eastern Sylvan Elf general); Hei Wan Ling, the Korobokuru shogun; and Hou Keung, the Korobokuru daimyo (king).

Samurai Saigo explains that his team has rescued Gen. Shinso and discovered a nest of Yuan-ti in the capital. Wu Jen Toshi casts Dispel Magic, revealing Shijo’s true reptilian visage, and he warns about the silversmith in the lower tier. Hei Wan Ling orders soldiers to be sent to that tier and the tunnels beneath the citadel.

Druid Ember is uncomfortable with the talk about hunting a dragon north of Hei Kuan but acknowledges her expertise on dragonkind. Outlanders Sonny, Soske’, and Tokoro keep quiet until asked to testify on the demihumans’ behalf.

Ryoushi Manabu reconsiders sending the group to escort emissary Lady Yun Aei-Yong home to Gisokuri. Instead, he decides to send Prince Mutsuhito, brother of Saigo’s lover Nayoko, because he already knows the way to the capital of Gokuri.

Hou Keung offers to grant each of the adventurers a title and land if they will deal with the dragon of corruption in the wilderness. They accept the mission and head back to the hotel.

Jung-Mo thinks about his divided loyalties between defending the innocent and restoring the honor of the Shadow’s Claw clan. Sonny makes a rendezvous with the slippery Lady Yun and writes letters to fellow survivors of his own disgraced house in the Lion Clan.

While still avoiding nosy family members, Soske’ hopes to thwart the forces of chaos. Similarly, Tokoro wants to protect the headwaters of his home streams. Saigo studies maps and hopes to learn more about the dragon’s followers….

Welcome back, Sara! It was nice to see everyone online and at our latest “Vanished Lands: Vistel’s Expedition” session. Remember that the “New Dawn” team will hit Level 10 as of our next session in two weeks, and you can update your characters on Obsidian Portal before then.

Remember that we won’t be meeting virtually on Dec. 7, but I look forward to continuing your quest! -Gene