“1 June 1227 B.C.E.:” After interrogating Hojo Etsuko, a River Spirit Folk who served the same master as Tokoro and who had agreed to a scheme to drive human peasants off their land, the diplomatic escorts let her go and hunted in vain for courier Desc Soo-Ann.

The would-be heroes then ventured into woods near Yao Shung and encountered a giant moth and hellgrammite (water larva), and Soske’ had a vision of an evil Druid.

Jung-Mo sends the horses back to the village, but Sonny thinks the group has lost the element of surprise against the Wu warping the woods. Toshi wants to push on, even as the day grows late.

Ember agrees with Sonny’s suggestion to use her shapeshifting ability as a surprise, and she recommends scaring or drawing out foes. Soske’ is certain that someone is aware of the destruction of the Jimenju (carnivorous tree bearing hypnotic head-like fruit) and Crimson Moth.

Saigo urges the group to approach the center of the gnarled grove from multiple directions. Despite his secret amphibious abilities, Tokoro is worried about getting caught in magical backwash and prefers to hang back as a sniper. Ultimately, Sonny, Toshi, Soske’, and Ember follow the direct path from the south. They see eight monkey goblins hanging in the trees to either side. The chattering creatures draw small throwing knives.

Meanwhile, Jung-Mo, Saigo, and Tokoro creep along a creek from the northeast. They see a chained Oni (Ogre Mage) and three small humanoids with crow’s heads. The big brute and birdlike beasts dance around a circle of standing stones.

Wu Ember casts Thorny Entanglment, which causes a tree to grow spines that it hurls at one monkey goblin, wounding it. The needle-toothed monsters hit Ember and Toshi with sharp blades. Kensai Sonny draws his bow but misses.

Wu Jen Toshi kills three monkey goblins with Cone of Cold and directs his tiger Amaya to pounce on another. Shukenja Soske’ shoots a goblin out of a tree with a flaming arrow from his Ancestral Weapon.

The horned Oni notices Tokoro, draws its great sword, and charges. The Hulinyuan retreats and draws his long bow, as the three Tengu (Kenku/dire corbies) hide behind a standing stone. Ninja Jung-Mo hits the Ogre with his short sword, and Samurai Saigo repeatedly slashes it with his katana.

The surviving monkey goblins scatter but still attack. Ember misses with her kama (sickle), but Sonny catches two with a Whirlwind Attack with his kau sin ke. Toshi unleashes Tien Sha Pai (Red Cloud Kung Fu) in front of his friends for the first time, finishing off a foe wounded by Sonny.

Soske’ eventually slays another monkey goblin, and Sonny draws shurikens. As the three remaining flee, Toshi takes down two with Magic Missiles , and Amaya chases the last one.

Over by the megaliths, the angry Oni misses Tokoro and Saigo with its large sword. Tokoro rapidly fires his bow, including a thorn arrow, but misses, as does Jung-Mo. Saigo continues striking the Oni with his enchanted katana.

Sonny, Toshi, Ember, and Soske’ see a robed man with a staff walking from a hut northwest of the main clearing. As Ye-sing Kien approaches, he summons stone armor and Enlarges himself. Hengeyokai Ember casts Silence on Amaya to interfere with the evil Wu’s spellcasting.

Shengtese human Sonny runs toward the spellcaster and swings his chain at the dark Druid but misses. Shengtese human Soske’ fires arrows at Ye-sing but also misses. Shan Sao Toshi casts Protection From Evil and Animal Growth on Amaya.

The Oni hacks at Saigo and swings wildly at Jung-Mo. Hengeyokai Tokoro casts Abundant Ammunition to keep up with his rapid fire. Although Nannuattan Jung-Mo misses on his second sneak attack, he does eventually strike the Oni, drawing its attention from injured Saigo.

Druid Ember runs over to heal the injured Bamboo Spirit Folk, casting Cure Serious Wounds. Sonny takes a flying leap from one set of standing stones but lands in the sandy pit in the center.

To move out of Amaya’s Silence effect, Ye-sing Wild Shapes into an air elemental, breaks free from weapon master Sonny’s chains, and floats out of reach. He then summons Nindenzigo, a fiendish Decapus. The tentacled horror narrowly misses Ember but snaps at Sonny with its claws and bites Amaya.

Shan Sao Toshi hits his opponent with a Lightning Bolt, and Soske’ isn’t put out when the corrupt Druid raises a Wall of Stone to seal Sonny, Saigo, and Amaya in the circle with Nindenzigo. 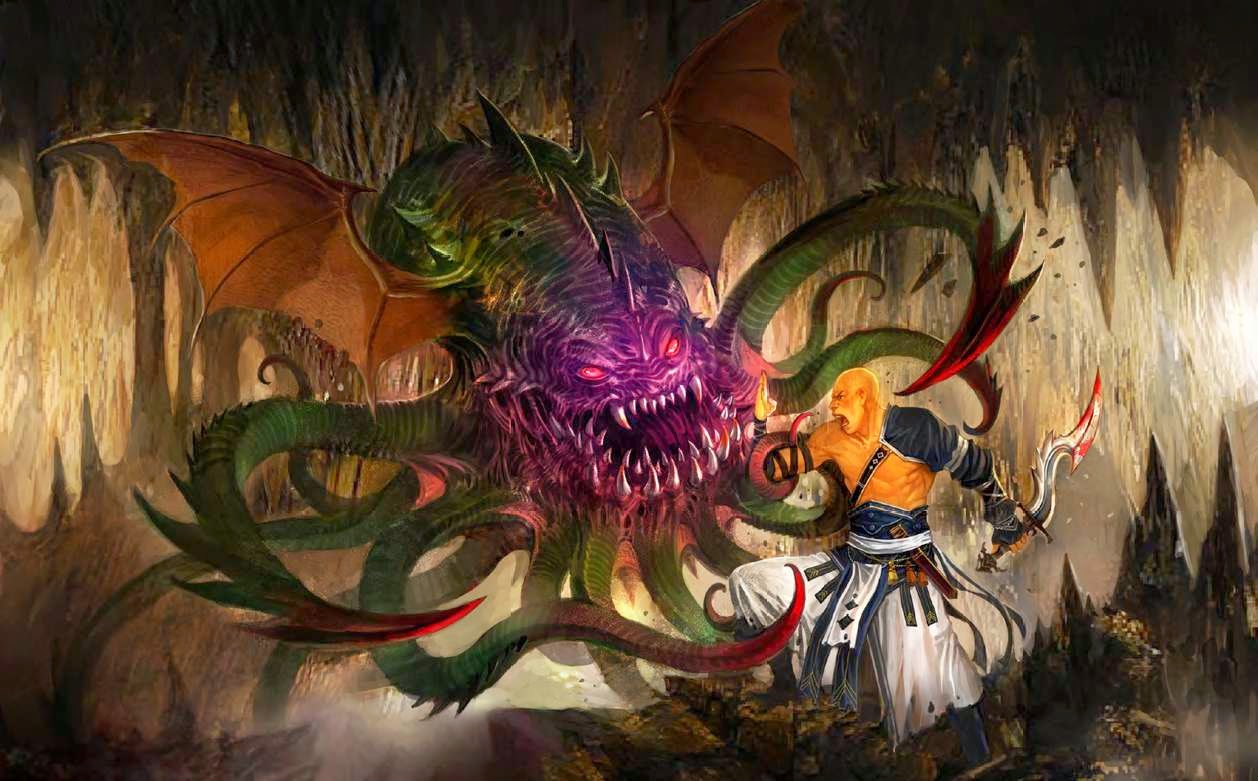 Ember Wild Shapes into a large eagle and claws at Ye-sing. Sonny uses his iron sword-breaker to fight defensively against the Decapus, and Saigo shoots arrows.

Jung-Mo Levitates and chucks a Whippet (incendiary boomerang) at the Oni, but he is surprised when it flies after him! The Ogre Mage hits Ember, Saigo, and Tokoro with a Cone of Cold. Soske’ Channels Positive Energy to heal his friends.

Sonny runs up a wall but is unable to reach the vaporous Druid, who Calls Lightning Storm against the adventurers. The martial artist climbs out of the circle with Nindenzigo. Cleric Soske’ successfully dispels the Decapus with a Holy Word.

Wizard Toshi casts Arc Lightning at the Oni and Druid. Rogue Jung-Mo defensively uses Darkness to evade the Ogre and maneuvers for another sneak attack. Ranger Tokoro and knight Saigo shoot the Oni out of the sky, disappointing Toshi, who is prophesied to kill many of the monsters.

Cleric Soske’ fires an arrow at the enlarged air elemental. Eagle Ember fights in the air. Toshi casts Mass Snake’s Swiftness on his allies and hits Ye-sing with a Sound Lance. A volley of arrows from Tokoro and company finally brings down the evil Druid.

Jung-Mo discovers that the three Tengu have returned to human form. They are Jik Zeng Meizhu, Zhan-Shi Shude, and Dao Xu Tan — the children kidnapped from Yao Shung! Toshi is relieved that they can’t be used for some unholy ritual.

Ember and Soske’ attend to the wounded, while Sonny, Saigo, and Tokoro search the Scarlet Order’s camp. They find the following items:

The triumphant team prepares to head back to the village before continuing on its diplomatic mission north….

I look forward to seeing some of you at tonight’s “Vanished Lands: Vistel’s Expedition” session! In the meantime, remember to make sure that your Obsidian Portal records for the “New Dawn” party are up to date.

Also, let me know who of you will be around for Byron’s visit to the Boston area next Wednesday, Oct. 8. Be seeing you, -Gene