“27 to 28 April 1227 B.C.E.:” A feast with Soske’s family revealed his prophesied destiny, information about Mt. Gruldar, and a potential assassination plot. The diplomatic escort began visiting various clan leaders, and the Shang crown prince arrived in the city of Sogewa.

Toshi asks Peng Arong, a Shengtese human earth elementalist from the Phoenix Clan, to look into the defense of Prince Zu Ji, who arrived with only 20 men rather than hundreds of soldiers as expected.

Soske’ asks Kiyoshi Takahashi, a priest at Our Fathers’ Steps, about his numerous encounters with Undead in his travels. After consulting with ancestral spirits, Takahashi says that although it’s not surprising that there are many corpses after recent wars, it’s possible that the dreaded Ghost Fleet on the Sea of Nagendwa is partly responsible for stirring up the unquiet dead.

At Silado Palace, Saigo keeps watch for the end of a meeting of Tong Sheng’s ruling council that Duke Kou Fei Seng hastily called after Zu Ji’s arrival from distant Yin. Instead of imperial guards, a band of mercenaries prevents any interlopers from entering the prince’s quarters.

After meeting with the Dragon and Lion clans, Jung-Mo, Sonny, and Ember join Lady Yun to the manor of the Crab Clan. Shengtese human Sonny recalls seeing an armored Samurai from that clan with a geisha at the House of the Red Lotus, but he keeps it to himself.

Spirit Folk Jung-Mo is surprised that Isamu Yasuki is rude to Nannuattan Lady Yun, but the Crab Clan chief’s candor about the end of hostilities between Tong Sheng and Gokuri is refreshing. Meanwhile, Hengeyokai Ember is curious about Jung-Mo’s frequent absences.

Saionji discreetly tells Saigo that he and Lady Yun may soon be reporting to a different authority in Tong Sheng, hinting that Zu Ji may force Duke Kou Fei Seng to step aside. Shan Sao Toshi talks with Budoka Yoshimitsu, a Kitsune (fox person) gardener, and You Mi-Sook, a Kenku (raven folk) herbalist on the palace grounds.

At Kiyoshi’s recommendation, Soske’ consults Ye-Seng Yang, a Yamabushi of nature goddess Ami Koshi. The Shengtese human walks beyond Sogewa’s outermost canals to a lush garden, where he finds his fellow Cleric fishing and relaxing. They talk about finding peace and smiting unnatural monsters.

At the Crane Clan estate, Lady Rekai graciously welcomes Lady Yun, and they soon chat like old friends. Sonny is suspicious of the matron of Daidoji House, which maneuvered his own in the Lion Clan to disgrace. The Kensai makes a few pointed comments to Lady Yun to raise doubts about Daidoji’s honor and standing.

Wu Ember observes that members of the Crane Clan dress in a manner similar to crane Hengeyokai, probably to honor a common ancestor, even though they are not shapeshifters themselves. Merchant Jung-Mo arranges for dinner with Ember, who has also been courted by Kamachi Yushiro, a Lion Clan Samurai.

Samurai Saigo uses a combination of bluffing and stealth to get past Zu Ji’s entourage into his quarters. Wu-Jen Toshi shifts into black baza (bird) form to keep watch outside and notices a raven sitting on a nearby branch.

At first, Toshi is reminded of You Mi-Sook, but the raven gives him a sideways glance. The eastern Halfling Wizard flies to the ground as the raven changes to its true Nezumi (ratling) form. 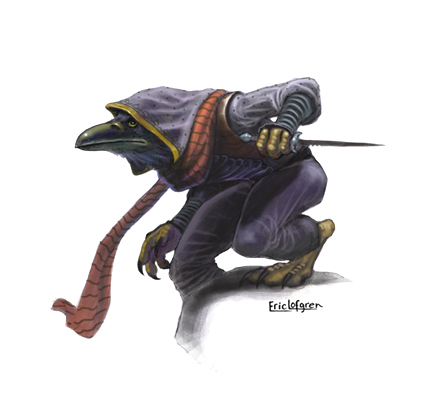 Toshi casts Magic Missile and Steam Breath, injuring the would-be assassin. The Nezumi uses a blowgun to fire poisoned darts at Toshi before switching to shurikens. Toshi shakes off the paralytic and casts Cone of Cold.

Inside, Saigo eavesdrops on Zu Ji, who tells his men, “It’ll be anytime now,” but he doesn’t hear Toshi fighting outside. The Samurai tries to disbelieve, but the prince is who he says he is.

The Nezumi Ninja quaffs a healing potion but is held in place by Toshi’s Web spell. He hurls more shurikens before being slain by Enchanted Blade and Lightning Bolt spells.

Shukenja Soske’ reluctantly goes to the shrine run by his Uncle Jiro, who has heard all about his adventures, thanks to other nosy relatives such as Soske’s cousin Yao-Ren Hu. Soske’ is alarmed when Jiro suggests that perhaps someone murdered the priests serving the villages beset by Undead to enable such attacks.

At dinner, Jung-Mo gives Ember a bracelet with dragon charms, indicating that he suspects her true nature. He finally reveals his identity as a Nannuattan to the banished gold dragon. In addition, Jung-Mo shows Ember his wyvern egg.

Toshi casts Camouflage and climbs the tree to search the Nezumi. He finds three shurikens, a vial of poison, 2 platinum pieces, a pouch of gems, and a Ring of the Raven (shape change 3x/day, but violent handoffs).

Saigo manages to slip out of the barracks, and he and Toshi go to rejoin their companions and compare notes. They find only Sonny, who has been staying with Lady Yun and Oh Kum-Ja, her Draconian bodyguard.

Soske’ prays to the ancestral spirits for guidance. He uses Commune With Lesser Spirit to ask about the agents of Chaos and plague of Undead. The Shukenja learns that there are some in the palace, both recent arrivals and a longer-term presence.

Soske’ is also concerned when he finds out that his group is the only one fully aware of the imminent danger to the Principality of Silado….

It was great to see everyone online after a few weeks! We’ll likely be facing another break, with Mother’s Day, travel, and Memorial Day fast approaching. See my earlier post regarding one-shots and other options for when we don’t have quorum.

Let me know your availability, and I look forward to seeing some of you at upcoming “Vanished Lands: Vistel’s Expedition” games and continuing our adventures! -Gene