Fellow role-players, here is my update for Session 42.1 of our higher-level D&D5e telecom game, which was held on Sunday, 27 September 2015:

In one ancient world, there was a place where strange majicks and demihumans thrived. The “Vanished Lands” were blessed by the gods and cursed by prophecy. Travelers became adventurers, and adventurers strove to be heroes in the face of many perils and wonders.

Sometime after a group of former circus performers wandered aboard the airship Zephyr and a team of diplomatic escorts fought chaos in Tong Sheng, another crew gathered on the Sea of Nagendwa, and past heroes reunited….

“1 to 3 November 1227 B.C.E.:” Deep in the Ivory Mountains, a Dwarf Paladin saddles her gryphon steed. Bellanora has fought monsters threatening the Zeda kingdom, but her father, King Bertrand, urges her to see the wider world.

At the edge of the Halmed Desert, a Suthern human cook gathers exotic seeds. Kunal has left the oasis created by the “Broken Chains” (including Eoghan) and returns to wandering.

On the central Plains of Sathendo, Gisar is inhabited by barbaric tribes of humans and humanoids and is ruled by vampires. Corwin belatedly joins Saganim countryman Melchior there to track down his half-brother Prince Daven and the malevolent Lord Dalek.

The Gusorin Confederation has fallen to the Undead and the Gokuri Empire. Warforged Amethyst heads to Gisar to seek work for his mercenary band.

Far to the northeast, Druid Ember leaves her friends in the Therud Forest to continue her quest to regain her true form as a gold dragon. The long-range communications networks established by “Milos” [Beruk A.] and “Elsa” [Rich C.G.] also bring news of troubles on the Sea of Nagendwa.

Disguised in black leather as “Randall the Rogue,” Corwin leaves “Vistel’s Expedition” and the airship Zephyr and slips into Gisar to look for Melchior. The Bard finds the Cleric’s safehouse, but it has been ransacked, and nobody is around. Corwin then heads to the temple of Brijitt, goddess of fire and poetry.

Bellanora avoids Barovic Castle and lands near the Sweetmeats Caravanserai at the outskirts of Gisar. She finds discreet stabling for her gryphon and senses malicious intent all around.

Kunal disembarks from a ship from the distant port of Falit. The Rogue hopes to free slaves and develop informants in gloomy Gisar. He sees Skaevingol (proto-Scandinavian), Tsucharim (Mongol-like), and Vistani (Slavic/Gypsy-like) humans, as well as Wolven, Nezumi (rat folk), and Minotaurs.

Amethyst arrives in the city and ignores curious stares as he walks on between Spice Square and Council Square on Indra Avenue. The battle master crosses paths with a large Ogre being ridden by a hairless Halfling. 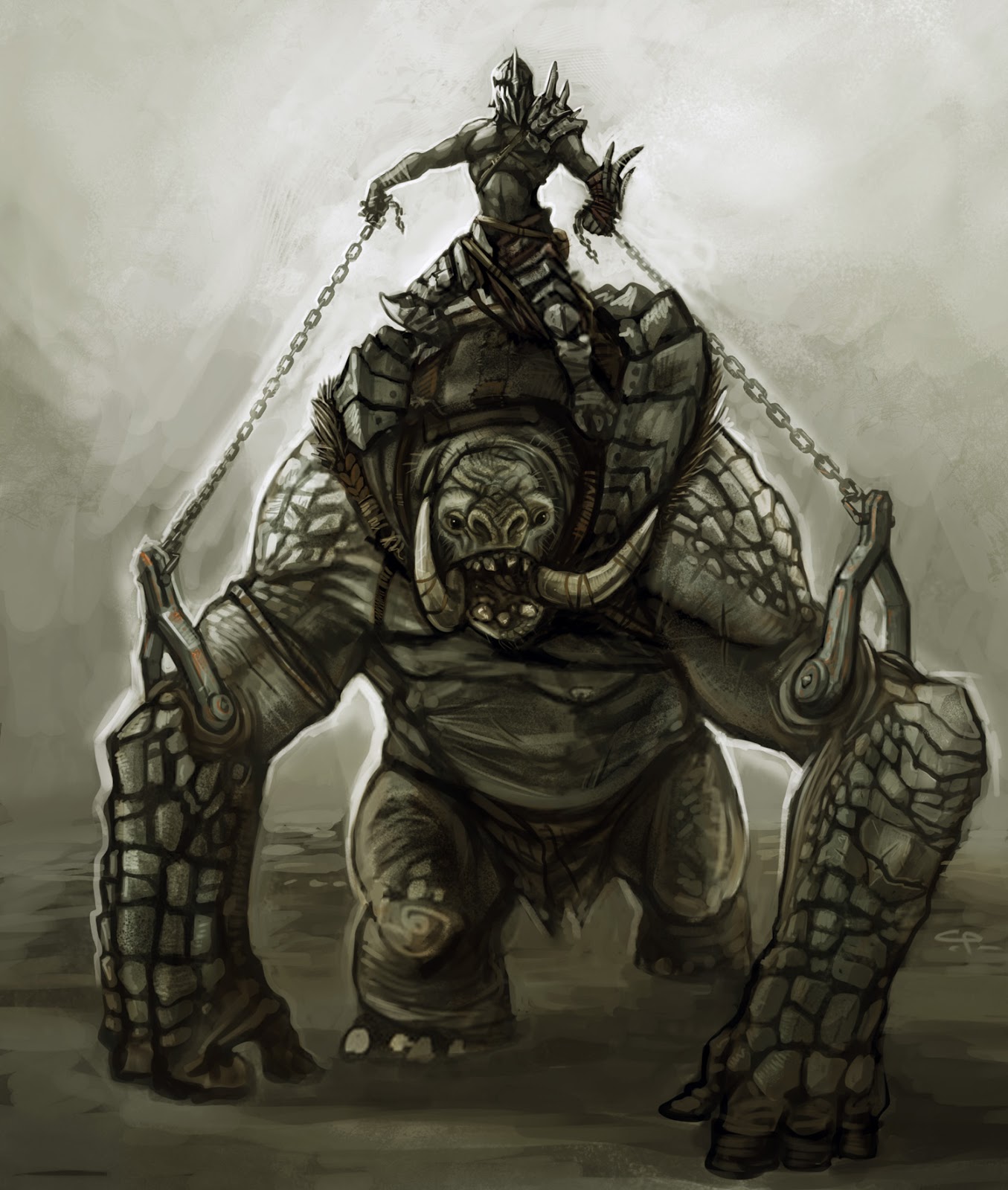 The Ogre brushes past the Warforged, despite the angry chatter of its rider, who expects to be addressed as “Milord” Drik Knobspittle. The Ogre, Drool-licker by name, begins boxing with Amethyst.

Bellanora isn’t impressed by the crowd gathering to watch the brawl, but Kunal bets on the construct. Meanwhile, at the temple of Brijitt, Gerta the Naughty greets Corwin. The wandering noble asks the priestess about Melchior, but she hasn’t seen the former “Seeker of Lore.”

An acolyte arrives and tells Gerta and Corwin about a street brawl nearby. They go to investigate, as Amethyst trips Drool-licker. Unharmed, Drik crawls out from under the Ogre and casts Tasha’s Hideous Laughter. His cream pie misses.

Corwin then recognizes a hooded figure standing next to a Dwarf in the crowd. It is the Tiefling mage Lord Dalek, who framed the young prince for the murder of his lover. Bellanora notices Dalek reaching into his robes and warns him not to interfere with Amethyst’s fight. The Wizard mocks the Paladin for as a spoiled ingenue who needs a man’s guidance.

Amethyst punches the prone Ogre, and Drik drops trou and emits a Stinking Cloud, which spoils Dalek’s attempted spellcasting. Kunal circles around, and Corwin casts Greater Invisibility on himself.

Drool-licker gets slammed by metallic Amethyst, and angry Bellanora draws Kestaz Heus, her holy warhammer. Scrawny Drik casts Grease, while horned Dalek creates a Globe of Invulnerability around himself. The Ogre struggles to stand up.

Vengeful Corwin calls down a Flamestrike on Dalek, also burning Bellanora and scaring away most spectators. Stealthy Kunal attacks Dalek, and Bellanora switches to her heavy crossbow, Taang Shmaukeh Kaurn, whose bolts penetrate the Tiefling’s Stoneskin.

Dalek retaliates with a Cone of Cold, injuring Bellanora and killing Drool-licker. Drik scampers away into the retreating crowd. Still invisible, Corwin stabs hated Dalek with his two short swords.

Amethyst bellows at Dalek, “Why did you get in the middle of my fight?” and pulls out his great hammer while making a leaping attack. Bellanora Dispels the mage’s Globe of Invulnerability and slays him with a Staggering Smite. She then prays to Vulkan (Moradin).

Bard Corwin beheads the Tiefling, and Kunal quickly searches the corpse before it is incinerated. The Rogue finds silver Saganim rings, a spellbook, some coins, and a letter by Lord Dalek in Barbari begging a boon from the “Red Circle.”

Fighter Amethyst tells Paladin Bellanora that he has been looking for a worthy fight. Corwin becomes visible and thanks Bellanora, Kunal, and Amethyst for their help. He invites them back to the temple of Brijitt for a safe place to spend the night.

Corwin gives Amethyst 500 gold pieces, but Kunal realizes that he can’t collect on his wager on the Warforged. Bellanora is still mad about being caught in the Flamestrike. Corwin asks his new allies to help him search for Melchior in the morning….

I’m glad that we got the new telecom team together, and I look forward to continuing our adventures on Sunday nights! Remember to review your character records on Obsidian Portal.