In one ancient world, there was a place where strange majicks and demihumans thrived. The “Vanished Lands” were blessed by the gods and cursed by prophecy. Travelers became adventurers, and adventurers strove to be heroes in the face of many perils and wonders.

Eldamir inquired into other Atlanteans and helped Barret at the arena, even as the “Masked Minotaur” gained arcane abilities. Puliarus visited the Istari Bazaar and got his scrimshaw analyzed.

Nuriel, Kamar, and Eldamir bid farewell to Itharides, a prominent Grey Elf adventuress and Nuriel’s grandmother. Itharides tells her kinsman to be careful in his travels and seems flattered by Kamar’s attention.

Eldamir inquires into Elven artifacts and learns of the Dragon Orbs, Bracers of Elemental Control, and Heart Bows, among other things. He also changes 5,000 crowns (gold pieces) into gems, platinum, and pearls.

Barret, Kaelen, and Puliarus visit the temple of Ismiltar. Lorna Travers, a priestess of the matron of magic, recommends that Barret undertake a quest to fully qualify to become an Eldritch Knight.

The people of Hesolin prepare to celebrate the autumn festival of Samhain. Eldamir recommends staying in the Golden Horn Hotel on Castle Court, but Kamar leaves to look for Itharides. He learns that the temples of dark goddesses Sherma and Ennenah are holding open houses.

Nuriel attends the lantern show at the temple of Corellan Larethian, head of the Elven pantheon. Kaelen, Eldamir, and Barret go to the “Bright Battlement” tavern in the theater district. They join a mummer’s parade in Bridge Plaza. 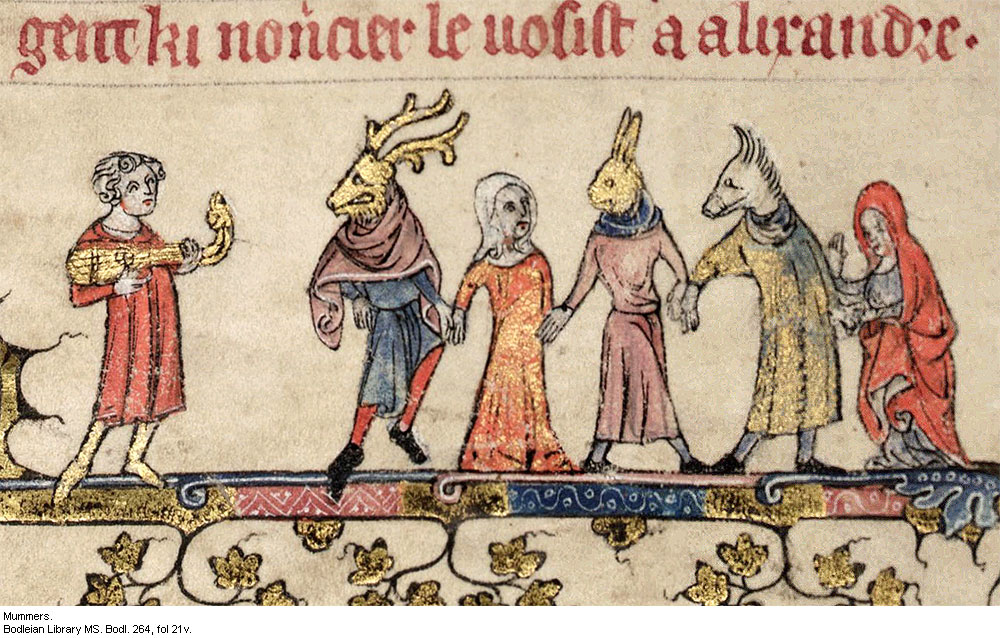 Out of the corner of his eye, Kaelen sees a mummer adjusting his mask, but there’s no face underneath! Two similarly garbed people guide nine revelers into a zone of Silence down a side street. Barret says the innocent must be protected.

The masked mummers begin sucking the life out of the hapless Hifalendorin (proto-Western European) humans. Eldamir rages and lunges for the ghouls. The Barbarian makes a reckless attack with his trident “Tempest,” strabbing one foe twice.

Two of the monsters miss Eldamir and Barret, who steps into the area of Silence. Kaelen casts Hunter’s Mark on himself, draws his short swords, and follows. Eldamir destroys one of the pale-skinned creatures, splattering black ichor.

The mummers rake Kaelen and Barret with long claws, and Ranger Kaelen responds with his blades. Fighter Barret gores and shoves his opponent before getting tangled up in the narrow alley. The revelers scatter.

Eldamir skewers Kaelen’s opponent, but the last masked villain scratches him. Barret gets a second wind and attacks. Eldamir helps finish off the last mummer.

Members of the city watch arrive, and Kaelen tries to explain what has happened in the absence of witnesses. Eldamir takes responsibility, but the guards are suspicious of the tattooed, long-haired outlander.

At a nearby watchtower, the guards pay 60 crowns as a bounty for the destroyed Undead. They explain that they’re overwhelmed with the Samhain celebrations around various temples.

Kaelen, Eldamir, and Barret then find Kamar talking to Yvonne Valetta at the Bards’ College and Nuriel with fellow Cleric Vellamo at the temple of Corellan. The next morning, Barret picks up the wooden armor he had commissioned for 40 crowns.

The next morning, the “Storm Riders” board the H.M.S. Alatuk at the recommendation of harbormaster Lord Adams. Capt. Khufu Ali orders the Hifalendorin naval vessel to head for the base at the Gargoyle Headlands.

Atlantean human Eldamir keeps to himself, and Minotaur Barret helps provide ballast. Puliarus studies charts of the Sea of Nagendwa. On the way east, they encounter the Raven’s Eye, a Hifalendorin longboat captained by Korvus Bracas. He is pleased to meet another honorable Minotaur in Barret.

The Alatuk approaches a cliff face with a fortified harbor at its base. Among the vessels docked there they notice one with a wide top deck free of rigging. Massive, mastaba-style walls tower above, with blue and gold Hifalendorin flags fluttering in the sea breeze. Before the visitors can climb the narrow, winding path up to the Gargoyle Headlands, they must submit to a scan by Hai-Yuan Peihsi, a Shengtese (East Asian) priestess of the sea lords. At the plateau, the group sees charioteers practicing. Lt. Laurence Tertius takes the adventuring party into the fort.

Thick pillars frame sunny courtyards around the barracks, stables, command tower, and chapel to Ismiltar. While most of the personnel are Hifalendorin, there are several Egyptian, Atlantean, and Saganim humans.

“Commodore Arthur J. Hudson” [Mark A.S./Non-Player Character] is preoccupied with other duties and doesn’t recognize Kamar right away. An ensign adds insult to injury by mistaking him for “Westly the Wondrous” [Alex J./N.P.C.].

The crew presents its letter of introduction from Lord Adams, and Commodore Hudson agrees to support its mission to scout Lirgad, although he notes that it would be unwise to take a Hifalendorin vessel into raider-plagued waters.

Kamar later catches up with Arthur over dinner and drinks. The former “Liberators” reminisce about their adventures six years ago [in “game time”/D&D3.0, 2000 to 2002], including venturing into the Underdark, racing Orcish warlords for the Axe of the Dwarvish Lords, and discovering the lost city of Eagle’s Rest.

Nuriel and Kaelen talk with Hei-Yuan Peihsi at a shrine to the Sea Lords. In the officers’ mess, Eldamir asks Capt. Theros Vanimelda, commander of the Ismiltar’s Quiver, about fellow Atlanteans. Barret and Puliarus go to the temple of Ismiltar, where they see depictions of the Ennead (Egyptian pantheon).

The Minotaur and Half-Elf meet Senmet bet Nirath, a priestess of the goddess of magic. She asks for a demonstration of Barret’s new abilities, and they go outside. The gladiator invokes Hendlir, guardian of travelers, and instinctively responds to a threat from Puliarus with a Magic Missile from his horns.

Fortunately, the storm Sorcerer is able to erect a magical Shield in response. Puliarus prays to Angkir, lord of storms. Senmet wonders if the gods have seen fit to share their powers. Kamar entertains the troops and acolytes with “Sympathy for the Minstrel.”

Sometime later, Barret reluctantly submits to a ritual conducted by Senmet. She tosses a quill at the Minotaur, which he disintegrates. The Cleric later explains that it’s a sign that he retains his free will and can still love and lose.

Senmet hits Barret with a pebble, which she interprets as proof that he can still be physically harmed despite his newfound powers. She sprinkles holy water on him, and it does not turn to steam, indicating that the enchanted brass orb on his horn isn’t diabolical or fiendish in origin.

The Egyptian woman shows Barret a mirror, and he poses, showing that he is capable (or not) of self-control. Those assembled have a vision of the moon between Barret’s horns, which Senmet says is a sign of Isis’ approval of his quest.

Barret wonders if he can recruit anyone for the “cult of the Masked Minotaur,” and Puliarus is grateful to learn that other Eldritch Knights may be able to help his friend learn to use his arcane abilities. They have a good Mediterranean-style meal.

Kamar rejoins his companions and suggests traveling over land toward Lirgad, hugging the coast to accommodate Puliarus’ Sea Elven blood….

I look forward to seeing some of you at tonight’s higher-level telecom session and to continuing the “Storm Riders’” travels tomorrow! -Gene