Otter in the mist, or rabbit carnivale

“6 to 8 October 1227 B.C.E.:” The team returned to the town of Drunstimlos, turned Necromancer Morgwyn over to militia chief Brenda O’Connor, and gave maps to Cmdr. Perry Maxwell. It then boarded the Saganim naval cruiser H.M.S. Dauntless, got to know its crew, and fought Merrows attacking a human coastal settlement.

Under the cover of Puliarus’ Fog Cloud, the landing party retreats to the dinghy. He and Nuriel help wounded Cassy, and Barret carries unconscious Kamar. A second boat arrives from the Dauntless with Kaelen, Eldamir, Brother Egil, and a few royal marines.

Brother Egil, a Saganim (proto-Celtic) human chaplain, heals Kamar and Cassy. Nuriel has exhausted his spells for the day, so he stays with a few guards at the boats. Horned Barret charges back into battle, as Puliarus cautiously maneuvers to cast Fire Bolt.

Newcomer Kaelen recognizes the 10 Merrows as a favored enemy and looses arrows from the rowboat. Cassy follows Puliarus’ lead and sneaks to the edge of the magical fog. Intimidating Eldamir rages against one aquatic Ogre outlined in Faerie Fire.

Bard Kamar aids Eldamir with vicious mockery, but two of the Merrows hit him rather than the Atlantean human Barbarian. Fighter Barret tries to toss one foe aside and join Eldamir.

Sorcerer Puliarus misses with one Fire Bolt but hits with another. Ranger Kaelen wades ashore, as Rogue Cassy drops an enemy with her rapier. Eldamir stabs at a Merrow with his trident, while Kamar offers an Inspiring Word to Kaelen.

The tough Merrows briefly knock out Kamar, Barret, and Puliarus, even as the marines continue releasing volleys of arrows at them. Half-Elves Puliarus and Kaelen manage to finish off three more foes between them.

The sea Orc snarls and says that an old woman, possibly a Scrag or sea Troll, told him about easy pickings. Kaelen executes the prisoner. The group retrieves the following weapons from the fallen:

It then enters “Novo Cidade,” whose dark-skinned inhabitants turn out to be former slaves whom the Saganim king granted land to resettle [see notes for “Tempestade” and “Vistel’s Expedition”]. Padre Franco says that his people have had difficulty with farming in the relatively cold climate and with some intolerant neighbors.

The Cleric asks the away team to see if it would be possible for them to relocate somewhere warmer. Kamar agrees to help, and Kaelen gives 50 g.p. in pearls and the extra weapons to help the people defend themselves.

The two dinghys then return to the H.M.S. Dauntless, and the mercenaries report to Capt. Sheridan Driscoll. He recommends greater caution in future missions ashore. 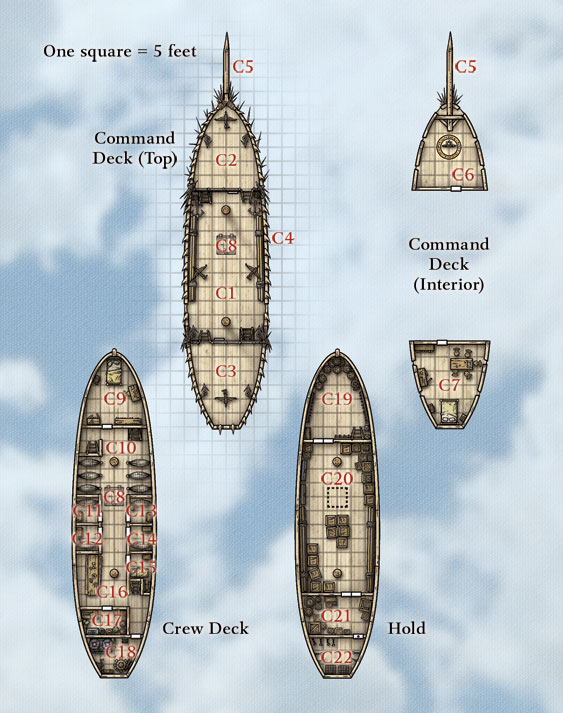 Eldamir and Barret debate tactics and practice speaking Bamoric, the language of the humanoids of the Bamor Mountains. Both burly brawlers chafe at the discipline of a navy vessel, even as Kaelen puts in a good word with the captain for Barret.

Amphibious Cassy and Puliarus also go for a moonlight swim in the Sea of Nagendwa and practice sneaking around. By contrast, Barret challenges some sailors to wrestling matches. The sometime gladiator surprises Kamar and others by defeating Lt.Cmdr. Brock ap Corgan, leader of the contingent of marines.

Eldamir cheers him on, but Barret is beaten by Bran MacDougal. After shaking hands, sharing drinks, and collecting winning wagers, all are fast mates.

The next day, Cassy spots someone walking along the shore southward from Novo Cidade. A young woman rides a mule without escort, despite the danger of brigands. Capt. Driscoll authorizes a change in course to a cove ahead of the woman so that another away team can question her about Merrow attacks.

Puliarus, Kaelen, and Kamar go ashore to meet the dark-haired woman, while Cassy, Eldamir, and Barret try to follow at a discreet distance. Esmeralda Cordina greets the wanderers and invites them to her cottage.

Sly Kaelen introduces himself as “Galen Moonglow,” a follower of Gheket, goddess of the moon. Wary Kamar uses the pseudonym “Carnivale,” but friendly Puliarus uses his own name.

Esmeralda prepares rabbit stew and explains that she is out of the way, so she has little to fear from pirates or bandits. The alluring woman claims to have bought supplies from the humans in Novo Cidade but hasn’t seen any Merrows.

Sensing danger, Barret bursts in through the door, confusing Esmeralda and her guests. Kamar is Polymorphed into a rabbit, but only Kaelen notices right away. The Half-Elf Ranger moves to subdue the enchantress with his sheathed sword.

Barret tries to grab Esmeralda, but the Minotaur Fighter has difficulty moving in the cramped cottage. Atlantean Barbarian Eldamir rages and stabs Esmeralda with his trident. The woman unleashes a glare at Barret, briefly stunning him.

Otter-kin Rogue Cassy catches lagomorph Kamar and puts the Suthern Bard out of harm’s way. Puliarus doesn’t understand why his companions are attacking Esmeralda, and the Half-Elf Sorcerer tries to interject on her behalf. They suspect that he has fallen under a Charm.

Kaelen draws his two swords, unaffected by Esmeralda’s Frightful Gaze. The woman claws at Eldamir, but Cassy is unable to trip her. Kamar returns to human form, just as Kalen kills the Sea Hag. 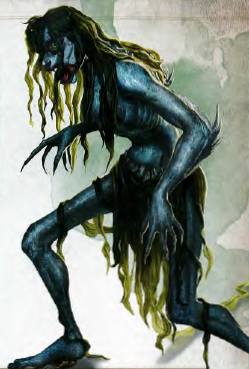 Relieved, the group searches her cottage and finds the following:

The landing party returns to the H.M.S. Dauntless as it continues to patrol the Saganim coast….

Remember to update your characters to Level 2 on Obsidian Portal. I look forward to continuing this crew and the “New Dawn” telecom team in the next two weeks! -Gene