“4 to 6 October 1227 B.C.E.:” Cassy joined the new team, which traveled to Tir na nOg and managed to return to the barrows near the town of Drunstimlos. The group evaded traps in the old tombs and defeated a Necromancer and his skeletal minions.

Nuriel notes that time flows differently in the fey Otherworld than on the Prime Material plane of existence, so it’s possible that they have been away for days or years rather than hours.

Barret and Kaelen lead the way across the wide Plains of Sathendo back to the camp where they had encountered a roaring bunyip.

Kamar points out that the bunyip’s blood is still damp on the heath, and Cassy sniffs the smoldering campfire. They conclude that not only have they returned somehow before they entered the barrows, but they also have time to catch a ship out of town!

Eldamir helps guard prisoner Morgwyn, who is bound and gagged. Puliarus recommends turning the Necromancer over to the proper authorities in Drunstimlos. Kamar and Cassy are tired as they hike back.

Geraint, the innkeeper at the “Sailor’s Climb,” directs them to a guard tower at the eastern side of the Saganim (proto-Celtic) human town. They see a sturdy woman training bored adolescents in the use of staff and spear. Brenda O’Connor dismisses her students and questions the motley crusaders.

The adventuring party testifies that it caught Morgwyn practicing Necromancy in the barrows, and O’Connor agrees to take him into custody and to notify Lord Caerdon. She also pays the group a silver talent (50 silver pieces) as bounty for the criminal.

The militia leader says that she’ll pay two more (100 s.p. or 10 gold pieces) once she gets approval from Lord Caerdon. O’Connor is also interested in learning more about bandits and witches threatening travelers around Drunstimlos.

Barret picks up the butted metal horn caps he had commissioned, and the group heads to the docks to catch the H.M.S. Dauntless, a Saganim naval cruiser. Cmdr. Perry Maxwell is pleased to get two maps retrieved from Fr. Gwydion, an erratic priest of Ghanki.

Kamar and Puliarus keep copies of the old maps of the town and a desert island, as well as one detailing the area around the barrows. First officer Maxwell gives the newcomers a tour of the dromond and introduces them to Capt. Sheridan Driscoll and his crew. 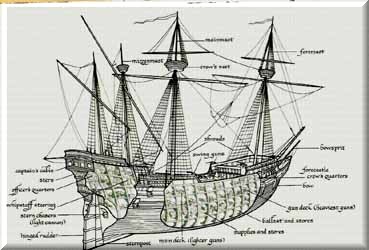 Otter-kin Cassy agrees to take shifts on lookout in the crow’s nest. Half-Elf Kaelen and Atlantean human Eldamir join some of the crew in the rigging and take shifts in the nightly watches. They see four ballistae mounted on the main deck and hammocks in the crew deck.

Nuriel sings in Quelithan (High Elven) to bid the shore farewell and welcome the Sea of Nagendwa. He also receives some implements and an invitation to services from Brother Egil, a Cleric of sea lord Ghanki. The priest of Corellan Larethian enjoys gazing up at the stars before clouds move in.

Kamar joins the crew in sea shanties and composes a song in Alitasse’s honor. Cassy and Puliarus are glad to be able to take an evening swim. Barret is determined to become the best at each role aboard the Dauntless.

The next morning, Cassy spots a plume of smoke rising from a coastal village. Capt. Driscoll sends an away team to investigate, accompanied by two rowers. Amphibious Cassy and Puliarus swim ahead of the dinghy to the beach.

They see 10 Merrows (aquatic Ogres) attacking brown-skinned humans. Bold Puliarus yells at them to stop in the name of the kingdom of Saganim, and the Merrows turn their attention to him. Cassy tries to hide in the sand.

Kamar, Nuriel, and Barret come ashore and leave the two guards with the rowboat. The Bard readies True Strike, the Cleric draws his bow, and the Barbarian loads his crossbow. Cassy throws daggers at the Merrows, but they fall short. The sea Orcs thrust harpoons at Puliarus, wounding the storm Sorcerer. Swashbucking Kamar borrows a spear from Nuriel and joins the skirmish. Puliarus casts Fire Bolt, but the Merrows are tough and agile.

Burly Barret hits one foe with a bolt, and Nuriel’s Warding Flash protects him. Unfortunately, the elegant Elf’s bowstring breaks because it was dampened by salt water. Rogue Cassy switches to her rapier.

The Merrows injure Barret, but five are pushed back by Kamar’s Thunderwave. Puliarus joins him and advances with wind magic. Barret gets his second wind and shoves two of the monstrous humanoids.

Nuriel pulls out a crystal, mutters, and outlines one of his opponents with Faerie Fire. Cassy strikes a blow before she and Puliarus are knocked unconscious by the Merrows. Kamar draws his rapier and casts another Thunderwave spell.

Nuriel hits some of the Merrows with a white flare from his crystal (Burning Hands). Kamar gives Barret Bardic Inspiration but is also knocked out by the Ogre-kin. Barret stabilizes Kamar, and Nuriel heals Puliarus, who wisely casts Fog Cloud so the team can fall back to the boat.

Nuriel and Puliarus grab Cassy, and Barret carries Kamar, as Kaelen and Eldamir arrive with Brother Egil and a few royal marines on a second dinghy from the Dauntless….

Two nights, two tough battles in a row! I look forward to continuing our D&D5e game, but note that I’ll be out of town later this month.

In the meantime, I also look forward to upcoming “Vanished Lands: A New Dawn” and “Star Wars: Dark Times” sessions. Have a great Independence Day! -Gene