“3 October 1227 B.C.E.:” The would-be adventurers consulted with the grieving parents of a young pirate, as well as with a local wizard before following an old map to some barrow mounds. They encountered a loud Bunyip on the way and found a strange portal in the tombs.

Meanwhile, back in the Saganim (proto-Celtic) human town of Drunstimlos, Nuriel ends his reverie and searches for his newfound companions at the “Sailor’s Climb” pub. Instead, the Grey Elf meets Cassy, an Otter-kin who says she saw them hiking north. The duo sets out after the motley crusaders.

Kaelen and Eldamir are worried when Kamar, Barret, and Puliarus step through the magical doorway into what appears to be a pleasant glade. They shrug in resignation and pursue them, just as Nuriel and Cassy catch up.

Nuriel is also entranced by the flowers, trees, and butterflies, which Kaelen, Eldamir, and Cassy perceive as more sinister. They spot a pirate’s bones. A small figure with a large nose peers out at the newcomers from behind a gnarled branch, and Cassy circles around to surprise him. 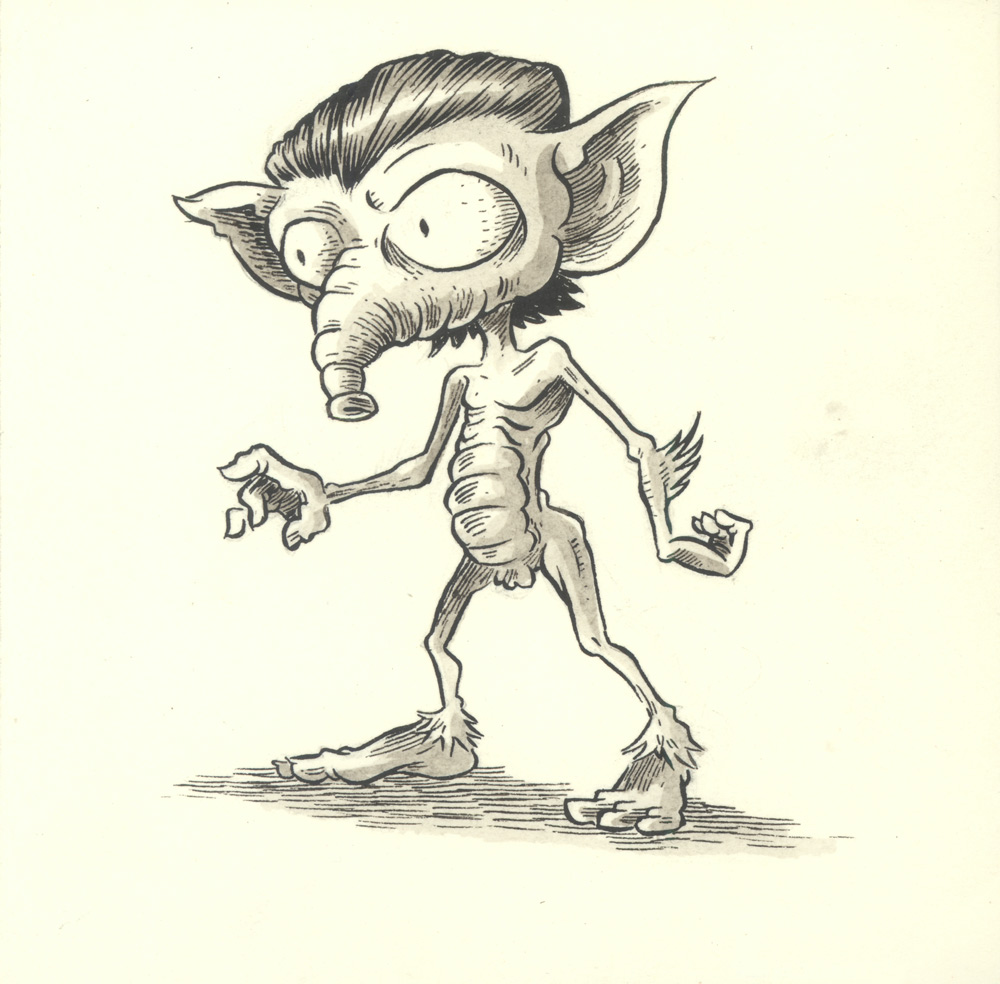 The Kilmoulis welcomes the visitors to Tir na nOg, or the “Otherworld.” He whistles, and more diminutive Fey appear. They offer to take the team to meet their “larger cousins,” whom Nuriel identifies as Sidhe, kin of the Elves.

Cassy, Kaelen, and Eldamir politely decline and manage to get the group back to the portal and the tunnels beneath the barrows. Minotaur Barret takes the lead, followed by Cassy and Kaelen.

Kamar and Nuriel follow, with Eldamir and Puliarus bringing up the rear. Humans Kamar and Eldamir light torches, and Nuriel coaxes his enchanted crystal into glowing. The spelunkers pass stairs and backtrack to an intersection near where they entered.

They then enter a long passage with three pairs of alcoves. Barret notices that the metal torch sconces aren’t rusted, despite being centuries old. Cassy scampers onto his shoulder for a closer look.

The Rogue suggests that they could open a hidden door, so the burly gladiator grabs one on each side of the hallway. The floor drops out, revealing a pit with spikes! Cassy hangs onto Barret, who hangs onto the sconces.

Kamar and Kaelen look 15 feet down into the pit, whose spikes are coated with grease or poison. The Bard and Ranger also see the skeleton of an unlucky grave robber. Cleric Nuriel uses Thaumaturgy to detect magic but senses none.

Barbarian Eldamir and Sorcerer Puliarus throw a rope, which Cassy uses to secure Barret and herself. Barret then jumps to the far side of the pit, while Cassy lowers herself into it. Kamar carefully joins her, and they retrieve an antique sword and a few intact arrows.

They then spike the trapdoor shut and follow Barret. The Fighter points out a pair of statues, and Cassy checks for more traps but finds none. At the third set of alcoves, the explorers decide to leave the (empty) suits of old armor alone.

The tunnels fork again. To the right (south) is some rubble, and the north passage leads to stairs down into a burial chamber. Three limestone sarcophagi are in the center, and each wall has more doors.

Nuriel and Barret are uncomfortable when Kamar and Kaelen use crowbars to look inside one sarcophagus. They find the remains of a blond chieftain clutching a long sword and wearing many rings. Cassy and Puliarus watch the doorways.

One exit leads to a corridor choked with webs, and another leads to more stairs down. The party descends and finds another crypt. Six skeletons attack with bronze blades!

Quick-thinking Cassy rolls marbles down the stairs in an effort to slow the Undead. Bodyguard Eldamir steps in front of Nuriel, who readies his light crystal. Kaelen and Barret replace the lid of the sarcophagus and draw weapons.

Kamar readies True Strike but doesn’t have a clear line of sight in the staircase. Puliarus holds a lantern and stays on rearguard. Cassy slips into the shadows, while Eldamir rages and charges with his trident.

Kaelen destroys one skeleton, and Nuriel falls back with Puliarus. Kamar grabs a crowbar and maneuvers, as Barret moves to aid Kaelen. The skeletons hit Kaelen and knock Kamar unconscious. The group glimpses a man in black robes laughing in the crypt beyond.

The Necromancer summons six more skeletons. Eldamir charges through them to the enemy spellcaster. Kaelen and Barret hold the stairs, as Kamar heals the Half-Elf. Nuriel tosses his crystal into the room.

One skeleton hits its ally rather than Eldamir, but another strikes the Atlantean. The Saganim human Necromancer casts at Eldamir, but he successfully resists. Barret gores and bashes the monsters in his way, and Cassy scores some hits at the top of the stairs.

Eldamir drops his rage and casts a net over the Necromancer, immobilizing him. Kaelen destroys another Undead with his swords, and Kamar gives Barret an Inspiring Word. Nuriel casts Prestidigitation and steps forward, hitting two foes.

The unquiet dead wound Eldamir and Cassy, but the Necromancer is unable to get free from the net. Barret gets his Second Wind and smashes two more skeletons.

After a few tries, Eldamir manages to knock down the Necromancer, whom he then pummels. Kamar destroys a skeleton, and Nuriel finishes Kaelen’s two opponents. Cassy and Barret take care of the last skeletons.

Eldamir, Kaelen, and Kamar search and interrogate the Necromancer. Morgwyn says that he was conducting research and that he has friends in a manor outside of Drunstimlos.

Nuriel recognizes the holy symbol of Gheket, mistress of dark magic, and Barret recalls that one of the maps they got from Fr. Gwydion at a decrepit temple of Addoh showed a house on a hill surrounded by water. It also showed signs of bandits and sorcery.

The party plans to pass on some of those maps to Cmdr. Perry Maxwell as a condition of employment aboard the H.M.S. Dauntless. Barret mentions that he has memorized them.

The wanderers debate over whether to continue exploring the barrows or to return to town in time to catch the Dauntless. They eventually decide to leave the tombs for later and to bring Morgwyn to the local authorities….

Welcome back, Sara, to our face-to-face games! Charles, we missed you this past Monday, but I’m glad that you were able to meet more people at Bruce’s fun cookout last weekend.

Don’t forget to upload your new (and backup) characters to Obsidian Portal if you haven’t already. Also, reemember that the D20/FATE “Vanished Lands: A New Dawn” telecom team won’t be meeting this coming Sunday because of Father’s Day.

I look forward to continuing our adventures, as well as to seeing some of you at Brian S.‘s place for next Monday’s session of Jason E.R.’s “Star Wars: Dark Times!” -Gene